Keeping your friends close, and your enemies closer: My trip to Husky Stadium

Share All sharing options for: Keeping your friends close, and your enemies closer: My trip to Husky Stadium 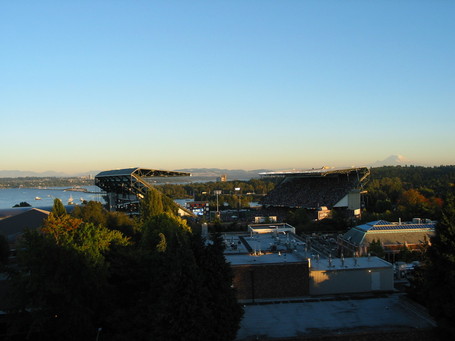 On Saturday, I did something a little unorthodox for a Coug fan: I attended a Husky game.

Now, before you question my Cougar fandom, consider the following things:

I view my attendance mostly as an experiment. I had never attended a Husky game before (not even an Apple Cup in Seattle) and wanted to know what things were like on the other side. The obsession with the color purple, this Jake Locker fellow, the stadium, the fan base. After all, how can I adequately make fun of understand the Huskies if I don't? It's the old adage: Keep your friends close, and your enemies closer. And since I'm out of my normal environment (Pullman) for six weeks on a pharmacy rotation, it seemed like a good chance to spy on see what the UW was all about.

I knew there were possible issues: my status as a WSU fan being called into question, which I'm probably a little more paranoid about than I actually should be. Also, getting the crap kicked out of me by a disgruntled group of Husky fans was an unlikely, but possible occurance (I knew they'd have numbers on us). Plus, there's Husky Fever, which according to Glenn Johnson can, in fact, get you down. Of course I could always just go for the cure afterwards: The Joker Pub in Issaquah... Cougar owned... Cougar run... Cougar prrrrrrrrrowwd.

But I digress. Let's break down my Saturday night in Montlake, piece by piece.

Parking/Transportation: Parking northwest of campus and taking a 30 minute walk to the stadium turned out to not be too bad of an idea, because again, it was free, and there was non-UW food available on the way. Uphill on the way back, though. I have no idea how most Husky football fans handle this aspect of game day, and I do not care.

It does bother me that the Ave. has more eating and drinking options than the entire city of Pullman. But, no Sella's, so it probably evens out in the end.

The Fans: All things considered, they're actually a pretty reasonable bunch of people. Apple Cup may be different, and we steered clear of the UW student section, so keep that in mind. We got one "You're on the wrong side of the state" comment while walking down the Ave. before kickoff. After the game, in my red jacket, I overhead someone (presumably drunk) yelling at me, "I see a tree!!" and then mumbling something about Stanford. I did feel more comfortable about being presumed a Stanford fan than a WSU fan in the U district. Still, for walking down to Ave, then all the way to our seats above the student section on the South side of the stadium, we didn't receive much in the way of smack talk. Of course, with the current state of our state's teams, I don't think either side can say a whole lot.

The fans inside the stadium were more likely to give us weird looks and then simply procede to their seats. Nice people, mostly. In fact the guy to the left of us greeted us with a smile despite being a huge Dawg fan. The stadium wasn't full - attendance was listed at 61,968 - but it was a surprisingly strong show of support for a team that coming in was 0-3, and will in all likelihood fire its coach at the end of the year. The support wavered after the 10 minute mark in the fourth quarter when Stanford scored to make it 35-21. Fans started leaving, and when UW missed the last chance onside kick down 35-28, a "Goodbye Willingham" chant resonated from a small group in the student section. Ah, the excitement.

The Game Experience: The PA announcer is, in one word, boring. Maybe it's the years of exposure to Glenn Johnson and his wonderfully semi-biased calls, but the UW announcer was lifeless. It seemed to me that they were trying so hard to be unbiased, to the point where he says "Here come the Huskies" in the same manner you'd use to congratulate some guy at work who annoys you on a promotion.

The Husky players don't come out of a tunnel, rather a stairwell where only 2-3 emerge at a time and run across the track to the field. It's as lame as it sounds.

We have our "Gator chomp", the Huskies counter with their own "Tomahawk Chop", done prior to every kickoff, regardless of the team receiving. (OK, it's not really the Tomahawk Chop, but it's pretty darn close)

One thing which I found hilarious is that it took about five "GO"s, before the other side of the stadium finally answered back "HUSKIES!" Harry the Husky clearly lacks the leadership of Butch in this category.

The cheerleaders are more noticeable than ours, probably because they can stand on the track and actually lead cheers for the student section. If our girls tried that they would just end up mixed in with the football team on the sideline, which couldn't end well.

The band was good, even though it felt like they disappeared from time to time. The highlights were A-Ha's "Take on Me" and Queen's "Fat Bottomed Girls". Nothing comparable to the Cougar marching band playing "The Final Countdown", however.

They did the wave.

The Stadium: One of the more disappointing aspects of the evening, because I expected a lot, although honestly it's pretty exciting if you're a Cougar. Husky Stadium is not in peak condition. In fact, it's falling apart at the seems. Nuss posted that great 2007 article on the Stadium's woes earlier this week, and it still rings true. The Huskies will need at least $150 million to start to set things right (hence the request for taxpayer money), and even then they will fall far short of the facility the Seahawks have in Qwest Field. Plus, how would adding a giant seating area behind the end zone help? It's like the early Phase III plans for Martin Stadium. Do designers not realize that while end zone decks may look cool, no one wants to sit there?

Let's continue with the elephant in the room: the track which surrounds the football field and makes you feel like you're sitting 100 yards from it. If this was WSU's stadium, and I could change one thing, it would be to take it out ASAP. Supporting track and field is awesome, really, but it's not like the UW is Oregon. If any Pac-10 stadium should have a track around its football field, it's Autzen (which doesn't).

The video screen, called the "HuskyTron", "HuskyVision", or something else lame that I can't remember, is much smaller than ours in Pullman. This makes me happy.

It gets loud. Really loud. One of those old-school stadiums where banging on the floor of the bleachers causes the whole place to rumble. I do have some doubts about whether it actually has an effect on the players out on the field.

The bathrooms are pretty awful. Troughs for the men, like the old Martin bathrooms, with bright orange-painted stalls which must have been chosen by the same interior designer who worked on Beasley Coliseum way back when.

Seating is decent, even if a little cramped, and I had a look into the box seats behind me near the end of the game. Hardly anyone was in there. Sight lines to the field are very good, and from our seats we could see Mount Rainier and downtown Bellevue. Not bad.

It's a strange facility, Husky Stadium, especially when you consider how state-of-the art Hec Ed, the tennis facility, and the indoor football practice facility are. And all those things are right next door. You'd think, from a distance, that Husky Stadium is the shining beacon of Northwest stadiums. The reality is it's far from it.

I came to see Montlake Jake, and then Ty ruined the Huskies' already dismal season by having Jake throw a block on a designed play and break his thumb. Ladies and Gentlemen, the Tyrone Willingham era!!

Ronnie Fouch, the Huskies' backup QB, appears to be a better thrower than Locker. This doesn't bode well for us in Apple Cup (if Jake is still out).

Stanford, my new sleeper in the Pac, just flat outperformed the Huskies with big plays and stops when they needed them. Anthony Kimble's 83-yard run keyed the victory, and it was clear the fans weren't happy with the direction of the coaching staff. My favorite comment was at halftime when someone blurted out, "YOU'RE FIRED!". Yes, my friend, I'm sure Ty heard that, and sure he will acknowledge you.

What did I take away from this whole experience? Well, for starters, WSU is in better shape than I thought. Not necessarily as a football team, but as a program. Our coach actually brings us hope for the future, our stadium is in great shape with the prospect of getting even better, and we don't do the wave.

Also, we're really more alike than we think. The knock on WSU's fans that I've heard from writers on the west side is that we're "WWE" type fans who just come to the game to cuss out the other team prior to drinking the night away. We're not even remotely that bad, and the Husky fans aren't exactly angels either. I saw more than my fair share of random middle fingers directed at refs, and at one point it looked like a fight might break out from what I think was a Duck fan in the student section. Really, Coug fans are no better or worse than most of our college counterparts, including the Huskies. And a large number of their fans, the vast majority, are good people, just like us.

Not to get too philosophical, but George Moore once said, “A man travels the world in search of what he needs and returns home to find it.” After my trip to Montlake, I can't tell you how exciting it will be to get back to the friendly confines of Martin Stadium.