Share All sharing options for: Basketball student section gets chopped

See the light blue in the picture above? That's the newly resized WSU student section. Now have a look at the orange part of this map, representing the old student section: 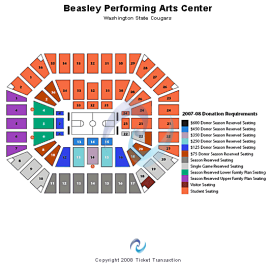 And just like that, say goodbye to the loudest home court in the Pac-10.

The WSU student section used to take up half of Beasley Coliseum, now it only takes up a third. Fans used to hound opponents from two sides of the court, now it's only one.

I had no idea what the ZZU CRU had become until I sat on the other side of the Coliseum with my family two years ago. It was astonishing; one of the loudest venues I have ever heard in sports. It was intimidating beyond belief - Ernie Kent called it the toughest place to play in the Pac-10. And coming from a coach that paces up and down the sideline of MacArthur Court, that's saying something.

Sadly, Beasley Coliseum will never be that loud again.

People started to grow tired - not of Cougar basketball, but of waiting an hour or two in line just to end up in the upper deck anyway. And from personal experience I can tell you the lower bowl of Beasley provides a much better game experience than the nosebleed seats. When Cougar basketball hysteria peaked - the game against UCLA in 2007, the line was so long to get in that it stretched from Beasley across the pedestrian bridge and nearly down to Bohler Gym on Colorado Street. I left directly from class to get in line that day about four hours before the game and still found myself waiting on the wrong side of Stadium Way. Three years earlier showing up at that time would've guaranteed you front row wherever you wanted.

The nail in the coffin of the old student section came in the basketball Apple Cup - the two overtime thriller last year in Pullman where the Cougs knocked off the Huskies for the seventh straight time. But it was also Spring Break. A smaller, but every bit as passionate group came out to see WSU that day. In the minds of the athletic department it was already over. The time had come to cut the student section.

That's not what I disagree with. I knew that about 1,000 seats needed to be trimmed off the student section. Financially, and in terms of game experience, it would be more valuable to the school for those empty student seats to become filled spectator seats. What I disagree with is how they cut it: no fans on the baseline on either side, and an overall seating cut of what I estimate at about 2,000 seats based on the diagram above. [Edit: 1500 seats were cut, from 5300 to 3800 - hat tip to dancing football] That's unacceptable.

Maybe my viewpoint will change next year when I'm no longer a student. After all, a sports pass is a darn good deal for a season ticket to every sporting event on campus. But then again WSU raised my professional school tuition 10% this year. Then again, the athletic department selfishly raised sports pass prices on graduate and professional students about $70 because we democratically voted down stadium renovation (the undergrads are already covering the $10 mil for Phase I, so it would've made no difference in overall funding). Then again, I see more and more students going deeper into debt as they try to secure enough money to pay tuition, living expenses, and yes, sports passes. Next year I could probably shell out for the most expensive season tickets on the board and still pay much less than I'm paying the University total right now. And I wouldn't have to show up five hours early to get good seats.

Next year I'll probably be complaining from the other side, about how we pay all the money for Cougar athletics and the students still get a huge cut of the seats. And I'll definitely be whining about the relative apathy on the other side of the arena.

Nevertheless, this is another small cut for the students, part of an overriding trend not just at WSU, but schools around the nation. Students don't pay the most, so they get the least. I understand the WSU is one of the best schools in the country when it comes to size of our student section, but it's because the school needs the student body to fill seats.

And what is with the "courtside seating" below the student section? Will what's left of the ZZU CRU fail to go down to the floor of the arena? Will this whole thing even have a serious financial impact for Cougar basketball?

I'm not trying to say the athletic department is evil. I would cut the student section in half again for four more years of Tony Bennett. We still pay much less for sports passes than the vast majority of BCS-conference schools, and we get our money's worth in quantity and quality of seating. But if you start cutting now, where does it end? Will it be worth it?

For now, Friel Court just got a little quieter. And that is not a good thing.