Welcome to our first official CougCenter basketball player profile post! We'll be coming at you with a lot of coverage over the next three weeks, including player profiles for each of the 15 players on the WSU roster -- in alphabetical order. Here's the first: 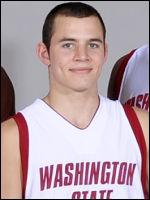 Scouting Report: Allen has the stature of a point guard but the mentality of a shooting guard.

A friend of mine who watches the Mountlake Terrace High School program closely said Allen is the most talented player he's seen in his 20-plus years watching the team, and that includes Seamus Boxley. Never heard of Boxley? He led the Hawks to an undefeated regular season and No. 1 ranking in the state back in 2000, was a four-year starter at Portland State, two-time Big Sky defensive player of the year, Big Sky player of the year as a senior, and at last check was playing professionally in Holland. Pretty high praise.

In his junior year, Allen scored 39 in a game, averaging 16 points for the season on his way to being named second-team All-Wesco.

You're probably wondering how a guy who's supposedly so talented ends up at WSU as a walk-on. He'd likely be playing on a scholarship for a mid-major somewhere, but he was forced to sit out his senior year by the always fair and incredibly sympathetic WIAA. Allen had repeated the eighth grade, and the WIAA determined that he had used up all of his eligibility after his junior year. He kind of fell off the recruiting map, eventually choosing to walk-on at WSU rather than attend Western.

Allen's presumably got a long ways to go to even think about contributing this year. One thing he's got going for him is that he's 19 years old, and more physically mature than the typical freshman. But he's not a natural point guard, and the Bennett offensive system puts a real premium on making good decisions with the ball. With Taylor Rochestie playing more than 80 percent of the minutes at the point and so many talented freshmen guards in the fold, Allen faces an uphill battle.

Best Case Scenario: Already able to hit the open 3 consistently, he comes in and proves he's a surprisingly good ball-handler and decision maker. With none of the other freshmen demonstrating an ability to handle the point, he seizes what few minutes there are backing up Rochestie, averaging a couple of points and an assist.

Worst Case Scenario: He's totally unready for the rigors of Pac-10 play. Unable to demonstrate that he can play the point, he's stuck behind a plethora of more highly touted recruits and rides the pine, never seeing the floor.

Likely Scenario: Allen will prove to be a little diamond in this recruiting class ... but not this year. One of the other freshmen will prove to be competent enough at the point to back up Rochestie, and Allen won't see much, if any, of the floor.