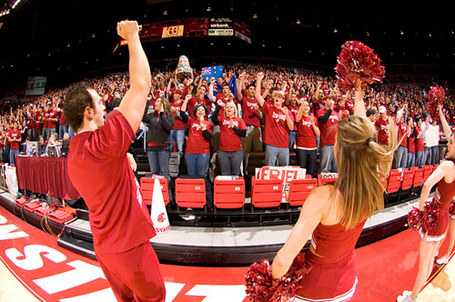 The ZZU CRU, Washington State's basketball student section, is something that is very near and dear to me. I was part of the first ZZU CRU, created in 2003 to try to amp up student support for men's and women's basketball. Neither were very good at the time. Dick Bennett was starting his now famous rebuilding project, and Sherri Murrell was struggling to get the women's team off the ground. At the time the athletic department was trying to find any way they could to get people interested in joining up.

Needless to say the ZZU CRU was a small, passionate group of Cougars at the time it was founded. The first president, Michelle, was elected by being the only person with the guts to volunteer at one of our first meetings. I sometimes wish I had stepped up and run for president a couple years ago, but ultimately I knew my major would hold me back from putting 100% into running the fan club. Besides, there were, and still are, plenty of great Coug fans with the motivation to do it. Back then we were people who could handle watching a few losses, because we believed that the Bennetts were dedicated to making Cougar basketball relevant.

And did they ever. When it started, the ZZU CRU was an incredible deal. For $10 you got the crimson t-shirt, and the ability to accumulate points for prizes. The great thing with the prizes was that you hardly had any competition. Something that allowed my friends and I to walk away with a large assortment of Cougar swag - from autographed team pictures, to video games, to miscellaneous prize packs. The best part was the premium seating. Showing up when the doors opened usually guaranteed you a spot in the first two to three rows.

Now, times have changed. Membership costs have increased slightly to $20 right before the season (less if you renew your membership early), and you'll be a lot harder pressed to find prizes, seats in the front row, or any other of the perks we used to enjoy with the ZZU CRU. It used to be the athletic department begging us to join, now its vice versa. And it's logical; the product on the court has changed dramatically from the days where the Huskies would bus in the Dawg Pack just to fill a few of our nosebleed seats.

The ZZU CRU turned the corner just when the team did - the stunning win over Gonzaga at home almost three years ago. Since then, it's been a fun ride marked by deafening nights at Friel Court, inspired chants and lines stretching from the Coliseum halfway to Moscow (Idaho, not Russia). The few times I have sat on the other side of the court with my family, I have been stunned at how loud it gets - it has grown into one of the most intimidating crowds in the Pac-10, if not the nation. It really is incredible.

Although we love to hate Duke, the Cameron Crazies still set the standard for raucous student sections. The organization, the noise, the (for lack of a better term) craziness. As the ZZU CRU moves into the next generation of Coug fans (this year will be my sixth and last as a student*), I hope it can rise to the same level as some of the more prominent student sections in the nation. Right now we are not in the same conversation as Duke, Kansas, Gonzaga, Oregon, etc. My hope is that we will be someday, and that Friel Court will continue to be an amazing environment to watch basketball. That's why I am breaking down the ZZU CRU in our first annual report card. I hope to examine the strengths and weaknesses of the section, and what can be done to improve the latter.

Size:  A- Even chopped down this year from 5,300 to 3,800 students, the ZZU CRU is a force just from volume alone. I dare you to find a louder, larger group of fans on the West Coast. You won't be able to do it - the Pit Crew, Kennel Club, Dawg Pack and others an cannot even come close. Last year we sat nearly as many students (5,300) and Gonzaga has total seats (6,000). The current ZZU CRU will still rival the size of Gonzaga's old Kennel. The only reason I gave an A- was the cut in student seats this year, and the removal of the student section from the East baseline. Both things will put a considerable dent in home court advantage.

Passion: B+ When you have to show up five hours before a big game just to get good seats, you know you're dealing with a very passionate fan base. I would give another A for this, but here's the catch: I'm constantly surprised by people who wait five plus hours in line just to just stand there and watch the game. No cheering, no jumping up and down, no heckling the other team. They just stand there. What's the point of that? So you can sit up close and personal to watch a game you're having no impact on? This annoys me to no end. If you're going to be crazy enough to wait in line for ages, at least act like it when the game starts.

Having said that, I love our fans. They're awesome, loud and verbally abusive without going overboard.

Team Support: A+ Not once have I heard our team get booed by its own fans. There's the occasional groan when young Baynes would fail to catch a pass, or when the offense just couldn't seem to hit its stride. Outside of that, the ZZU CRU does an excellent job of supporting the home team with cheers, signs and noise. Little fairweathering is present, and hardly anyone leaves early.

I am concerned, however, that with higher expectations and an incredibly young team this year, that the boo barrier might be broken. I sincerely hope not - that is one of several things that could ultimately drive Tony Bennett away. So if you do, you an expect this writer, regardless of where he's sitting, to tell you politely to STFU. I would spell that out, but I have a strict "no swearing" policy on the blog.

Organization: C+ Chants are often disjointed (you got swat-you got-clap-clap-swatted-clap-clap-clap-clap-clap...), one of the things that may actually be remedied by removing students from the baseline section. We finish the fight song about 5-10 seconds faster than the band does, a personal pet peeve of mine, and it takes an inspired effort from someone to get a new chant going (like last year's "OJ did it" chant). However the "Go..... Cougs.... Go.... Cougs" chant is still solid and the gator chomp is always reliable.

Seat saving prevention: D- At football games, there is a "pass card" for the lower sections that allows only those who made it to the game early to sit closest to the field. I see no reason why this wouldn't work for basketball. There are occasional efforts to prevent seat saving, but they usually fall on ZZU CRU leadership because CMS does nothing. Ultimately, very little progress has been made, and I still want to murder the guy in the third or fourth row for the Arizona game last year that saved about six seats for other people. I'm partially serious about that statement - it's easy to be grumpy after a few hours in line.

I think some seat saving, when it's a big group saving one or two seats for friends who are at class, work, etc. is OK. It's just the mass seat saving - 3 or more at a time for people who show up less than an hour or so before the game - that I have an issue with.

Also, the entrance policy needs to change. Having a ZZU CRU shirt be the standard for early admission is unfair and shortsighted. People have to shed layers of clothing when they come through the door, and some people may lose their shirts during the season or share them with others who didn't pay for membership. The real standard should be a unique sticker on the back of the person's CougarCard, that can be replaced if the person gets a new card.

Leadership: C This is a particular point of emphasis for me, and a challenge to the current ZZU CRU officers. It's not that previous leaders have necessarily been doing a bad job - they've been fine.  it's just that they haven't been "leading" the ZZU CRU in games. What I mean by that is leading cheers, giving handouts to students, and organizing events. Why don't we have a "gray out" or "white out" just to change things up every once in a while? It's tough to organize those kinds of things, I know, but it can be done. My challenge for the leadership is to be creative and foster a better environment for the fans. And if you aren't already, lead by example. Jump up and down on defense, be loud, be early, etc. I hope to make this an A or a B next season.

There used to be an "Enemies of the state" handout given to the student section before the game with "dirt" on the opposing teams. However it was usually very tame and didn't have anything that led to any in-game chants. I don't know if the athletic department edits those - they might - but I want to know things like Mike Jensen supplying alcohol to minors, Ian Crosswhite's love of marijuana, or Spencer Hawes' infatuation with President Bush. Thanks to myspace and facebook, embarrassing information about opposing players is everywhere. There's no reason to get mean, or derogatory, but I think the student section has a right to know about things like prior arrests, DUIs, public comments, etc. Again, it's not our job to hurt people but if it's public knowledge, some things are fair game. And I am in no way condoning slurs involving race, ethnicity, sexual orientation, etc. Unless they're Canadian. I don't trust those guys.

Overall: B+ We're not the Cameron Crazies. But the ZZU CRU is loud, passionate, and devoted to their team. With a little motivation from the students and help from the leadership, I really believe the ZZU CRU can place its name among the most famous student sections in the nation. We're already very close. We just need to take the next step.