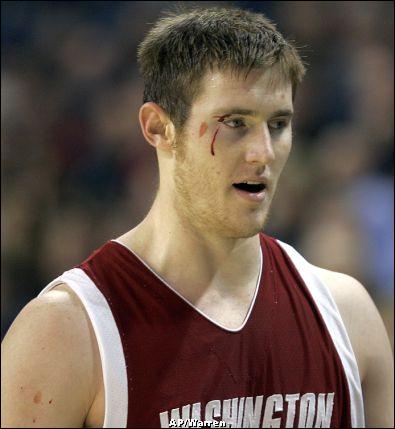 Scouting Report: Perhaps no player has improved more over his career during the Bennett regime than one Aron John Baynes. Derrick Low transformed himself into a scorer, but he was a scorer in high school. And with Kyle Weaver, you could always see the potential, despite the growing pains. But Baynes? When he came to Pullman, he was little more than a wide body with lousy footwork, no post moves and hands of stone.

Now, he's on the cusp of becoming the premier big man in the Pac-10 conference.

There's a saying that a basketball player should add one new dimension to his game each year. Baynes has exemplified that coachism to a tee, proving himself to be one of the most diligent workers in the program. As a sophomore, he started catching most of those interior passes he used to drop and started finishing them with dunks. As a junior, he flashed an array of post moves, transforming himself into a legitimate threat down low.

So what should we expect Baynes to unveil in his senior year?

Through the first half of last season, Baynes truly was a compelling force, taking advantage of teams trying to shut down Low and Weaver. In fact, he was the Cougs' most consistent scoring threat early on. But once teams started to catch on to Baynes' tendencies, they started sending double teams at him from different spots on the floor. Often late to recognize the defensive pressure, Baynes would either kill the possession by forcing a bad shot through four arms or force the offense to reset by dribbling out of the post to find a passing lane.

Anticipating double teams and finding the open man is the next logical step for Baynes. There were times last year when he was a virtual non-factor offensively. It generally didn't kill the Cougs, thanks to guys like Low and Weaver, but he won't have that luxury this year.

Of course, Baynes brings much more to his game than just offense. He's already one of the best rebounders in the conference, and with the loss of Kevin Love and the Lopez twins, he probably is now the best. (Although Jordan Hill might have something to say about that.) He uses his considerable width efficiently, boxing out anyone unlucky enough to be on the other side of that rear end.

The key with Baynes, though, is the fouls. Known around the conference by officials and opposing fans alike for his befuddled looks after every whistle, foul trouble has always limited his contributions. He's supposedly shaved another 10 pounds off his frame. Will it help him stay on the floor?

I'll wrap it up with this: No player more holds the key to the success of this season than Baynes. If he's a legitimate threat, even in the face of double teams, this team can be very, very good. If not, and the burden falls to the young guards? Who knows?

Best Case Scenario: Baynes indeed adds that last missing element to his offensive repertoire, and he adds two to three assists to his tally each night. Defenses now have to play him honest, and he exploits them mightily. The lower body fat also results in increased agility. His rebounding numbers increase as he's able to stay on the floor longer. He single-handedly dominates a dozen games throughout the season, becoming All-Pac-10 first team.

Worst Case Scenario: The only change in Baynes' game is his weight. He still can't cope with double teams, he still can't stay out of foul trouble. The weight of interior play ends up falling to Caleb Forrest and DeAngelo Casto, and they can't handle that kind of a load. Another All-Pac-10 honorable mention after a nice season.

Likely Scenario: Baynes has once again improved. He's still not the most skillful passer, but his double team recognition is markedly improved and good enough to make teams occasionally pay for cheating on him in the post. Pac-10 officials finally start giving him the benefit of the doubt, and he's able to play more minutes, although fouls still are a problem from time-to-time. He proves to be the best rebounder in the Pac-10, and ends up averaging 14 points, 7 rebounds and two assists on his way to All-Pac-10 second team.