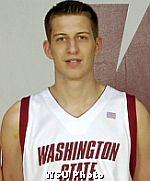 Scouting Report: Boeke is such an unknown quantity for the Cougs. He was supposed to come in last year and provide some much-needed depth up front, but wound up sitting out the year thanks to the NCAA ruling that the club he played for in his native Germany paid him too much for his services the year before paid some other players -- not Boeke -- and determined it was guilt by association. Additionally, the NCAA penalized him a year of eligibility.

The thing is, we probably wouldn't have gotten anything out of Boeke, anyway. He's had a balky back since arriving in Pullman, and he didn't practice much last year. Even now, the injury is keeping him from being a full participant in practices, so my guess is not even the coaching staff really knows what Boeke might be able to really give them.

He's light for a big man, and according to scouting services, he's got the typical Euro big man game: Face-up player, good shooter, light in the post. At 6-foot-11, the guy weighs less than I do, and it's unlikely he's going to put on much more weight -- he's already 22 years old, despite only being a sophomore -- so it's unlikely he'll ever become a true interior force.

If healthy, Boeke definitely could add a different dimension to the offense, especially if he and Baynes can get on the floor together. Their height on defense could be intimidating, and their offensive games could complement each other ... but that's a big "if," given Boeke's nagging injury problems.

Honestly, your guess is as good as anyone else's what the team will get out of Boeke this year. He could be a huge x-factor if he gives the team anything positive ... or he could be a total non-factor.

Best Case Scenario: Boeke's back proves healthy enough to hold up to 15-20 minutes a night. His face up game spreads the floor, giving Baynes more room around the bucket. Boeke ends up averaging 6 points, 3 rebounds and a block.

Worst Case Scenario: The back just can't hold up to the rigors of big time college basketball yet. Bennett and his staff shut Boeke down, redshirting him in the hopes of getting him healthy next year to fill the void left by Baynes. He doesn't see a minute of action this year.

Likely Scenario: Boeke's back is a constant problem. Bennett picks and chooses his spots to use Boeke, based largely on matchups. With his offensive repertoire, he'll have at least one game where he seems to make a big impact, but will too often be a non-factor -- kind of a 15-minutes-one-night, DNP-the-next type of player.