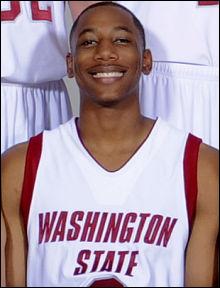 Scouting Report: So, everyone's heard the story by now. Marcus Capers came to WSU because Taylor Rochestie volunteered to give up his scholarship and create a spot for Capers. But what did the Cougs really get?

Probably the most athletically gifted guard of this heralded freshman class.

People want to try and label Klay Thompson as the "next Kyle Weaver," but the honest truth is that Capers' game compares much more favorably to what Weaver brought. He's long and lanky, and according to ESPN's Scouts Inc., he's kind of a jack-of-all-trades with just a good, overall feel for the game. This makes him one of the many candidates to earn some time handling the ball while Rochestie takes a breather.

What has got to have the coaching staff excited is Capers' athletic potential. He's a bit shorter than Weaver (6-foot-4 to 6-foot-6) and a little lighter (172 to 201), but he looks like he could add strength without losing anything. If anyone has the potential to be that next great Cougar lockdown defender, it's Capers. Additionally, he's explosive off the floor. I loved Weaver, but think how many times you saw him do this:

Although athletic, my understanding is that Capers' offensive game is not as polished as it's going to be, although he does seem to be the leader in the clubhouse in the "best smile" contest.

Best Case Scenario: Capers proves a capable ball-handler and really distinguishes himself with his defense, earning 15-20 minutes a night in that crowded backcourt. Additionally, his athleticism makes him a favorite target of Rochestie in the transition game.

Worst Case Scenario: The "Jack of All Trades, But Master of None" moniker applies and Capers just doesn't do anything well enough to distinguish himself. He sees minimal time on the floor behind more polished players such as Klay Thompson and Mike Harthun.

Likely Scenario: Like Fabian Boeke yesterday, Capers becomes a bit of a situational player. Because of his not-quite-ready-for-the-Pac-10 offensive skills, he fits well into a unit where 3-4 other good scoring options are on the floor with him. He sees 10-15 minutes a night, averaging 6 points and 1 steal.