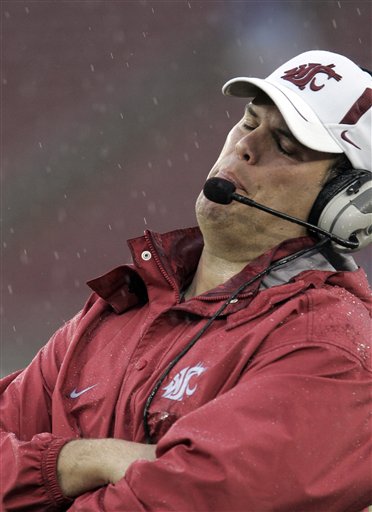 Two weeks ago, Washington State saw its streak of 280 games without a shutout come to an end.

This week, the Cougars couldn't even start a new one.

Five turnovers, including three fumbles, doomed the WSU (1-8, 0-6 Pac-10) offense against Stanford (5-4, 4-2). The Cardinal dominated the game by taking advantage of those turnovers and exploiting a poor WSU rush defense. The Cardinal finished with 344 yards on the ground and seven rushing touchdowns. Toby Gerhart led the way with 22 carries for 132 yards and four touchdowns.

The Cougars, meanwhile, were stagnant again on offense, even with an appearance from true freshmen J.T. Levenseller. On his first play, a botched handoff attempt  to Logwone Mitz cost the Cougars the ball deep in their own territory. Levenseller burned his redshirt to throw four passes, completing two for 20 yards. The day wasn't much better for Cougar starter Kevin Lopina, who threw two interceptions. He finished the day with 132 yards on 16 of 28 passing.

WSU was not quite as awful as the score indicates - the difference in yards gained was only 456 for Stanford to 225 for WSU. The Cougars also failed on two trips to the red zone. However, it had to be a disappointing effort for a Cougar team that beat Stanford in Pullman one year ago.

Stanford is now one game away from being Bowl eligible under second-year head coach Jim Harbaugh.

CougCenter Player of the Game: Mr. MVP himself, Reid Forrest, with 6 punts and an average of 37.8 yards per on a rainy day in California.

Stat of the Game: The Cougars set the record for most points allowed in Pac-10 conference play (350) over the course of a season - and there are still three Pac-10 games remaining for WSU.