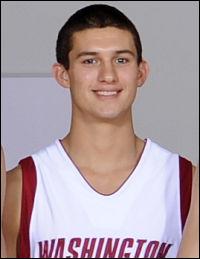 Scouting Report: With all hype surrounding Klay Thompson these days, most people forget/never knew that Mike Harthun was the original jewel of this recruiting class. He was a Scout.com and ESPN.com top 150 recruit heading into his senior year, when Thompson, who had also verballed WSU, was considered a borderline major conference prospect. But while Harthun battled a series of nagging injuries his senior season, his star started to be dwarfed by Thompson's huge ascention.

Anyone who underestimates Harthun -- and his potential contributions this year -- because of that would be making a huge mistake. Harthun is still a stud, and probably the most likely freshman guard outside of Thompson to make an immediate impact.

At the very least, there are minutes available behind Taylor Rochestie as the backup point guard, and Harthun seems most likely to fit the bill. He's not a natural point guard, but of all the freshmen, he's probably the closest to being someone who can handle the ball with regularity. It sounds as if he's already made an impression with his decision-making skills, something that is so very important in the low-possession Bennett system.

As a scorer, Harthun is described as a cold-blooded shooter who has exceptional range.

Best Case Scenario: Harthun earns 15 minutes a night on his scoring prowess alone, but he also proves he can handle the ball and make good decisions. This leads to him earning another five minutes a night running the offense when Rochestie's not on the floor. He plays 20+ minutes a night, scoring 8 ppg.

Likely Scenario: Harthun plays about 15 minutes a night, and is Rochestie's primary backup. He averages 6 points, thanks largely to excellent 3-point shooting.