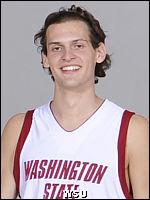 Scouting Report: When Koprivica came onto the scene in 2006, only the most die-hard Coug fan even knew who he was. But he promptly displayed a unique skill set that made him an immediate asset to a team experiencing a breakthrough season. Koprivica is your quintessential Euro player -- minus the outside shot. He's smart both with and without the basketball, and showed a great knack for getting his body into creases and getting to the bucket.

But then he suffered a season-ending knee injury in that freshman season, and he just wasn't the same player last year. He seemed heavier and slower -- not good for a guard who already is 6-foot-6 and over 210 pounds. Slowed by a bulky knee brace and unable to get by defenders as he had in his freshman year, Koprivica was largely ineffective on both ends of the floor. He rarely exceeded 15 minutes of action in a game.

Let's hope to goodness we get the Nik of two years ago. That guy would be a tremendous asset to this team. Two years ago, we spoke of Koprivica the way we speak of Caleb Forrest today -- as a guy who always seemed to make his team better when he was on the floor. As neither a guard nor a small forward, the versatility of this "wing" would make a huge impact ... if he's really healthy again.

Best Case Scenario: The Koprivica of two years ago is, indeed, back. He's slashing and bullying his way to the bucket, taking advantage of smaller defenders with his size and bigger defenders with his quickness. He's even improved his outside shot a bit, and emerges as an unlikely dependable scorer for this squad. His quickness also allows him to defend both guards and forwards, giving Tony Bennett a lot of flexibility with his lineups. He plays 25 minutes a night and averages 10 points and 3 rebounds and 1.5 assists.

Worst Case Scenario: He's lighter, but it's clear he's probably never going to really recover from his knee injury. He's a little quicker than last year, but the shiftiness of 06-07 is gone. Although his experience is an asset, he's unable to truly distinguish himself from the freshmen to earn major minutes. He plays about 15 minutes a night, averaging 5 points, 1.5 rebounds and 1 assist.

Likely Scenario: I think he's probably close to the best case scenario, but I question whether he can truly be that consistent of a scorer with his suspect jump shot. Count on more like 20 minutes a night, 8 points, 2 rebounds and 1 assist.