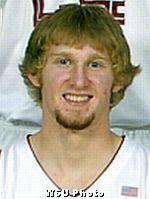 The first thing you notice about Lodwick, a 6'7", 200 pound guard from Bend, Oregon is his shooting form. It's textbook. Those of the Cougar faithful that didn't see it in pre-game warmups last year (Lodwick's redshirt season), certainly saw it on Monday night when he went 3 for 3 from behind the arc. This is one player who will be almost unaffected by the change in three-point line distance, considering that he's in range when he crosses the halfcourt line.

What we have yet to see is where Lodwick's other strengths lie. Can he defend? Can he drive to the basket and finish? Can he pass? These are things that we'll have to see develop throughout the course of the season. They are also things that will decide how much playing time the redshirt freshman gets out on the floor.

We know he has height, and his high school numbers show good rebounding prowess for a guard: he averaged nine a game his senior year in Oregon. He also averaged three assists and (get this) three blocks per game. Now it's easy going up against 5'10" players from central Oregon, it's a whole 'nother thing to go up against Darren Collison or Demar DeRozan. But his high school numbers are a good indication that he can develop into a quality player. Certainly he did not look rattled in the exhibition and displayed a good feel for Bennett's offensive system. That and his on-ball defense will be the key for his future with WSU.

Lodwick wasn't a McDonalds All-American nominee and first-team all-state player for nothing. He's an athletic guard with good all-around abilities that could be developed into something great. He also has the versatility to play the two or the three. Something that will be helpful when the Cougs look to go with a three-guard lineup, but try to avoid sacrificing height. But can he have an impact this year?

The real question lies here: will he just be another lights-out three point shooter like Chris Matthews, or can he elevate his passing, defense and rebounding to a level where Bennett has no choice but to play him?

Best Case Scenario: Lodwick not only shoots the lights out, but plays like a young Kyle Weaver. He becomes the team's sixth man and earns a few starts along the way.

Worst Case Scenario: Not ready for the big time, Lodwick spends a lot of time on the bench. Not a total loss - we'll need him next year.

Likely Scenario: Abe Lodwick is used off the bench in favorable matchups, hitting the occasional three and holding down the fort while some of the starters get a rest. He plays anywhere from 0-15 minutes (sometimes more) a night depending on his performance in practice.