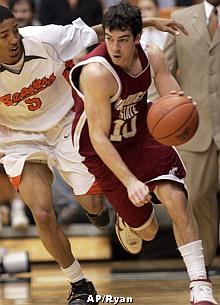 Scouting Report: Rochestie, along with Aron Baynes, Daven Harmeling and Caleb Forrest, is one of the last of what is likely to be a dying breed: The WSU recruit who nobody else wanted, still trying to prove the world wrong even after all these wins. The term "crafty lefthander" has perhaps never been so apt as when it's applied to one Taylor Rochestie. He's hardly a physically imposing player, what with his slight frame and impish good looks. But what he lacks in athleticism -- although he's much more athletic than most casual observers give him credit for -- he more than makes up for in smarts and moxie.

I never saw Tony Bennett play in college, but I've got to imagine TB sees a lot of himself in Roschestie. (Minus the no-conscience shooting, of course.) Rochestie is a ridiculously smart basketball player who almost never makes a bad decision on the floor; when he does, it's almost a shock to the system. And like Bennett, don't let the good looks fool you: Rochestie is a charismatic leader, he's got some fire in his belly, and he's a stone-cold killer when he's on the court. (Which is almost all the time, because he played in more than 85 percent of the Cougs' minutes last year.)

Rochestie is an incredible floor general who almost always makes the right pass at the right time. He averaged 4.7 assists last season -- a pretty remarkable amount for a team that only averaged 59 possessions last year. If you extrapolate that number out in North Carolina's 75-plus possession run-and-gun system, that works out to about 6 assists per game, a figure that would put him in the top 10 nationally. Most impressive, though, is that he did it with a 2.8-to-1 assist-to-turnover ratio -- best in the Pac-10, and eighth nationally.

But lest we consider Rochestie just a facilitator, his great decision making generally extends to his offense, too. He'll take a timely 3-pointer when the situation calls for it -- HELLOOOOO WASHINGTON HUSKIES! -- but will also slash to the bucket if defenders start crowding him too much. He's a creater who is deceptively quick and adept at both finishing and dishing.

Rochestie is underrated nationally, but believe me: Every coach in the Pac-10 knows just how good he is, and every game plan they put together this year will first and foremost seek to limit Rochestie's impact on the game.

It might sound preposterous to most, but Rochestie holds the key to the Cougs' season more than anyone else. How well this team does will depend on just how much he can elevate those around him, especially the freshmen. Do not underestimate the impact of simply having a guy handling the ball who can deliver it to the right spot at the right time in a location -- right on the numbers -- that allows a player to be a triple threat. If Rochestie can do that with the added attention he'll be getting, as well as up his scoring a bit, this team can be very, very good.

No pressure, Taylor, but our hopes for a third tournament appearance rest on you.

Best Case Scenario: Rochestie elevates his game and elevates his teammates in the process. He averages his usual 5 assists a game, but more importantly averages 15 points a game. He continues to confound defenses with his shiftyness, introducing a drive -- gasp! -- to the right. He finishes his career in style, leading the Cougs to a third straight NCAA Tournament appearance.

Worst Case Scenario: With Low and Weaver no longer around to take the pressure off, Rochestie just can't handle the added attention. In a desire to help the team be better, he presses, making shaky decisions with the ball -- both in his passing and in his shooting. Unable to elevate those around him to the necessary level, the team finishes in the bottom half of the Pac-10.

Likely Scenario: I just think there's no possible way Rochestie doesn't come up with a huge performance in his senior season. As a competitor, he wants to leave his own legacy at WSU. His experience proves invaluable in the myriad close games this team will play this year, and he lifts the play of all of his teammates. Will it result in another trip to the Dance? Who knows. But I'm confident that if this team doesn't make it back, it won't be because of Rochestie.