Share All sharing options for: APPLE CUP: Turnovers likely will tell the tale

I don't think it's any secret that the Cougs are less talented than their opponents, espcially with the state of the infirmary all season long. But what has exacerbated their play to historically poor levels has been the almost unbelievable quantity of mistakes this team has committed.

However, the two aren't necessarily mutually exclusive. I mean, if you're an offensive lineman, and the guy across from you is a heck of a lot more talented than you, are you more or less likely to commit a holding penalty? If you're a quarterback and you're trying to squeeze the ball into a small hole, are you more or less likely to throw an interception with Kevin Lopina's arm or Mark Sanchez's arm?

You get the picture.

There's also the question of decision making, such as when the secondary completely blows a coverage, or a linebacker over runs a crease. Is that a coaching issue, a learning issue, or a talent issue? It's certainly partly coaching and learning, but I'd argue that decision making ability also is part of the overall talent package. Some guys never learn, regardless of number of reps or the ability of the coaching staff.

To that end, here's a quick look at our team's (extensive) mistakes this season*: 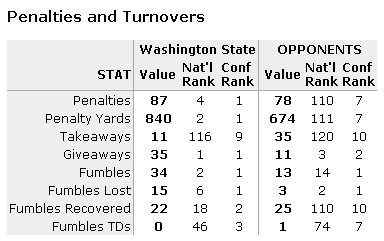 Of course, our numbers in the first three columns probably don't come as a shock to you. We lose the turnover and penalty battle virtually every week, and that's not luck.

More interesting to me is the second set of columns. In a lot of ways, my point about talent is cemented when you look at how many mistakes our opponents have made in the turnover department. Our opponents cumulatively have among the fewest giveaways in the nation. (Incidentally, I'm a little befuddled by the high number of penalties by our opponents. If anyone's got a theory for why we've drawn the 17th-highest number of penalties in the country, I'm all ears.)

I bring all this up because it's tempting to look at Washington's record and think, for the first time all year, we won't be completely outmanned, position for position, against an FBS school. But the statistics don't back that up. Consider: 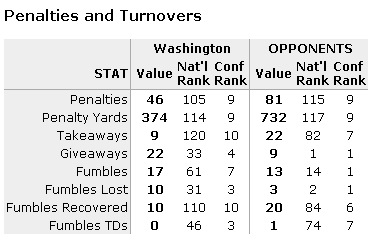 Washington has committed among the fewest penalties in the country and is in the top quarter of the country in giveaways, suggesting that they might not be as outmanned. If we still suppose they are outmanned, they at least make smarter decisions. Even if ineffective, they're not generally going to beat themselves in the tangible ways that change games. (As if you needed one more reason to be pessimistic right?)

But if you're looking for a ray of light, look at those takeaways. The Huskies have just nine all season, and that includes three interceptions on Saturday against UCLA. This is not a team that makes plays on the ball on defense, so, in a sense, it becomes the irrisistable force of the WSU turnover machine against the immovable object of the polite UW defense. If our defense can come up with a turnover or two, all the better.

Can the Cougs hold onto the ball for once? That would go a long way toward winning our fourth Apple Cup in five years.

* Thanks to statsheet.com for the charts.