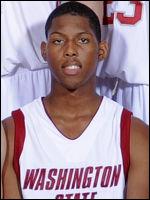 Scouting Report: James Watson is long, athletic ... and raw. I suppose that's what you get from a guy who is incredibly gifted, but attended a high school with less than 100 students. (That's total, not just in his senior class.) Now, I'm sure Watson hit the AAU circuit like most guys, but your high school team is where a player cuts his teeth, and small school opposition generally doesn't provide a tall player with the need to develop any kind of polished offensive game.

Grady saw Watson play in the exhibition game, and he said Watson is perhaps the most athletic of all the freshmen. That's pretty high praise, given what we've seen from guys like DeAngelo Casto and Marcus Capers. But the fact that he has yet to leave the bench in two blowout wins for the team -- raising the assumption that the goal is to redshirt Watson this year -- tells you about all you need to know about his offensive game.

Should injuries dictate it, it seems Watson could have an impact defensively. But this looks like a project with upside -- the kind of guy who could pay huge dividends down the road in that fifth year if he works hard on his game. The tools are there; it's going to be up to Watson to develop himself into a legitimate force.

Could he see the floor this year? Sure, if injuries dicatate it. The team is deep up front right now, but we're just one or two injuries away from needing another body. But I'd bet the team tries to redshirt him unless the situation is desperate. Cougfan.com rightly points out that two years ago, the coaches took a wait-and-see approach with Koprivica, who sat out much of the preseason before coming on as something of a revelation. But I think it's not necessarily an apples to apples comparison, given that Watson is much more projectable and is clearly farther from his ceiling than Koprivica ever was.

Best Case Scenario: The frontcourt stays healthy and Watson is allowed to redshirt. It pays off huge dividends down the road, as he grows another inch or two, puts on 30 pounds over the next few years, and becomes a dominant low post presence in the Pac-10.

Worst Case Scenario: Injuries force Bennett's hand, and Watson has to play. He doesn't contribute much, just 5-10 minutes a night. It's necessary, but it feels like a waste. By the time Watson's a senior, he's just starting to scratch the surface of what he could be, but his eligibility is gone. We all sit around wondering what could have been if we had just one more year. (Thomas Kelati, anyone?)

Likely Scenario: Watson gets to preserve his redshirt. If players are banged up, Bennett will turn to Charlie Enquist for those 5-10 minutes a night. But if we have a couple of key injuries up front -- especially during the Pac-10 slate -- all bets are off.