Share All sharing options for: Let's talk about chicks, man 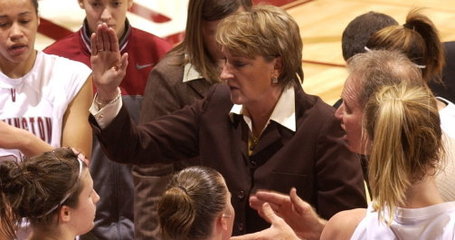 I felt like I had to do that. See, some people see women's basketball and immediately switch off. Or skip the post, and head down to our coverage of the horrific football team we root for. Or think up the first WNBA joke that comes to mind. Or just leave us in favor of other fascinating things on the internet. That's fine - if you're like that, go ahead and do it. We're not here to judge.

But I will say that I don't understand why. Maybe it's coming from a high school that won two girls basketball state championships in my three years there, but I have more of an appreciation for women's basketball than some. I'm well aware the level of athleticism is nowhere near that of the men. And I don't care, because I don't watch it for that. I watch it because it can be every bit as exciting as the men's version, with an actual emphasis on fundamentals. Imagine that! I like that women actually have to shoot the ball, and that they have to be just as sound in passing and playing defense as the men are.

In fact, if I ran the NCAA, I'd go ahead and ban the dunk in women's ball. But that's a whole 'nother topic.

For now, tonight marks the unofficial start of the 2008-09 Cougar women's basketball season, with an exhibition game at Beasley Coliseum (an exhibition they won 101-64 against "Showtime basketball", a team that not only plays basketball but supports rotisserie grilling)

It's been a long time since anyone could say that about WSU women's basketball. They haven't been relevant since I arrived in Pullman in 2003, and even well before that. Sherri Murrell, a successful coach at the University of the Pacific, was supposed to rescue the Cougars from the cellar of the Pac-10. She tried her hardest, and gave us a few years of stellar play from Kate Benz, but ultimately stepped down. She now coaches at Portland State.

Enter June Daugherty. If you want someone to thank for the current buzz surrounding the program, thank Todd Turner. Turner was the University of Washington athletic director who foolishly fired June Daugherty after 11 successful years coaching the Huskies. [Side note: Turner also hired Tyrone Willingham - why don't we just enshrine this guy in the WSU hall of fame right now?] Daugherty's teams always gave the Cougars fits in Pullman - they attacked on defense, forcing turnovers, converting easy buckets, and picking apart WSU with superior talent. Brilliantly, when June was fired, Turner had said he wanted to create some "buzz" around the UW program with a new hire.

It backfired. Now all the talk is shifting to Pullman, where the Cougars welcome a nationally ranked recruiting class, while a once prominent UW team falls to seventh in the preseason Pac-10 poll. The Cougars were ranked ninth by the media, but I'm not buying it. This season will be the start of the turnaround for a once beleaguered basketball program. WSU finished with two conference wins last year, a number which equals their best efforts under Murrell. The only way to go is up, and June Daugherty has the program headed there.

For a team coming from such a different place, the women's team is actually eerily similar to the men's this year. Why? It's led by an experienced group of seniors and  will rely heavily on a large group of talented freshmen.

Of course returning a lot of experience doesn't always translate into winning. But experience and talent do, and the Cougs add a truckload of that this year. Like the men, the women welcome seven true freshmen onto their squad. Unlike the men, all seven received nominations for the McDonald's All-American team.

It's easy to gush about the accomplishments of the recruiting class, and I already did back on my old blog. Allow me to shamelessly quote myself:

There’s Katie Grad, a Sporting News honorable mention All-American from Auburn. There’s Jessica Oestreicher, a 6′8″ center who is nationally ranked and will be WSU’s tallest recruit ever. There’s April Cook, who played for a #1 nationally ranked Long Beach Poly high school team. There’s Lexie Pettersen, a 6′1″ forward who finally breaks the hex of Wazzu being unable to recruit elite Spokane-area players. There’s Danielle Lenoir, Jazmine Perkins, and Rosie Tarnowski, all of whom you can read about here so that this paragraph doesn’t take over half the page. And it could with all the accolades the future Cougars have racked up.

A lot to be excited about, and I should give another nod to the official athletics site, wsucougars.com, where you can learn even more.

So come out to Friel to watch the women play. Or don't. Honestly I love the current guarantee of great seats (often front row) to watch at least one of our two basketball teams.

But don't say I didn't warn you about the future of this team. You might as well jump on the bandwagon now, because it's going to be a fun ride. And it all starts in a matter of days.