The game that saved the season

Share All sharing options for: The game that saved the season 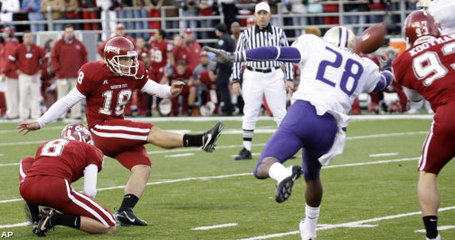 It was a forgone conclusion. The 2008 Washington State Cougars were the worst football team in Pacific-10 conference history. The only debate remaining was whether or not this was one of the worst Division 1 football teams of all time.

Enter the Washington Huskies. 0-10, but it wasn't for lack of effort. They should have gone to overtime against a top-25 BYU team. They played a schedule ranked as the toughest in the nation by many in the media. They played good Pac-10 opponents well into the second half. The only real embarrassments for the Huskies were thrashings at the hands of USC and Oklahoma, both top five teams.

Despite what my pregame prediction would have you believe, I didn't think the Cougars had a chance in this one. The Dawgs were seven point favorites, and if I were a betting man (which I'm not, thankfully), I would've bet on UW covering that spread easily. Sure, it was two of the worst rushing defenses in all of college football, but ours was much worse. Historically bad.

What I didn't count on was that we were playing a team with offensive and defensive lines that were practically as bad as ours were. It was clear lame-duck coach Tyrone Willingham thought he could run his way to victory. He almost did. But the Cougars countered with 171 rushing yards of their own - 4.6 per carry compared to 3.9 for the Huskies.

And the Huskies should have won the game. It's truly incredible how the tables have turned in the last three years. It used to be the Cougars were the team that was consistently snatching defeat from the jaws of victory. Blowing games that they should have wrapped up. Now, look at three of the last four Apple Cups. In all of the Cougar victories, Washington was either leading or tied prior to WSU's final drive.

This time, it was a particularly shocking play that made it happen: Kevin Lopina to Jared Karstetter, a 48-yard pass completion for a team that looked inept at throwing the ball deep all afternoon. Two Husky defenders were in the area; neither were in position to make a play.

And we should thank Ty WIllingham for putting us in that position. Remember, all the "prevent" defense does is prevent you from winning. And running three straight run plays for minimal gain on the Huskies' last possession of regulation gave the Cougs the minute they needed to get down the field. And they used every second of it.

Of course I still didn't believe it. Two seconds left, and the game was put squarely on the foot of Nico Grasu. Maybe it was living through the Loren Langley era, but I had lost faith in Cougar kickers. I saw the scoreboard, 10-7, and thought immediately that it wasn't going to change. I was wrong. Grasu's kick was actually quite ugly, a bullet sent in an angle where thankfully it found its way through the uprights.

And then there was the first overtime. After Wulff made the gutsy call to go for it on fourth down, the Cougars didn't get in the end zone. And when Willie Griffin took the ball on the next possession to the six yard line, it was game over. Shades of the infamous Maurice Jones-Drew game a couple years back. And then Louis Bland came in and saved the game - blowing up Griffin on the next play for a two yard loss. One more stop, and crisis was averted. Tie game.

I don't know why these things always go to two overtimes with the Cougars, but it did. And when Ryan Perkins whiffed on the third missed Husky FG of the game, there was a feeling the Cougars could finally pull it out. They didn't make it easy for Grasu, though, when Dwight Tardy got send back three yards on a 3rd and 2. The distance was 37 yards, and into a screaming end zone of Husky fans (seriously, why do we give them that many seats?), Grasu put up the game winner.

So Nico Grasu gets his name forever attached to Apple Cup lore, and a really unlikely hero has emerged. He had never made more than two field goals in a game coming in (Portland State). He was only five out of eight on attempts coming in. He had whiffed an extra point attempt against Oregon State. Now it doesn't matter: he can miss every kick for the remainder of his career and still have this game to hang his hat on. My heart was pounding in the student section when the last kick went up. To go out and execute it like Grasu did took some serious guts.

It was an inspired performance by the defense all afternoon. I can't emphasize that enough. 10 points given up in the first half. 0 in the second. No big plays, no backbreakers like the ones that haunted us in the last Apple Cup in Pullman.

The beauty of this is simple. How can the Cougars be the worst team in conference history when they aren't even the worst team in the conference this year? Now we get to debate how historically awful this Husky team is - possibly the first UW team to go winless since the 19th century. Certainly their first 0-12 team, assuming Cal takes care of business. And even if UW pulls off a miracle and wins that game, we still hold the tiebreaker for ninth place.

This season was lost. I barely even looked at the ASU game box score because I had run out of reasons to care. The Cougar football team gave us a good one yesterday. If nothing else, we won one of the most exciting Apple Cups in history. And that's a pretty good way to go out.

CougCenter Play of the Game: Lopina to Karstetter, of course. Grasu's field goals are a close second and third.

CougCenter Player of the Game: Nico Grasu. It's hard to deny Bland, but Grasu had to have ice in his veins to hit on all three of those field goals yesterday.

Strange Stat of the Game: Kevin Lopina still has not thrown for a touchdown in his college career (0 TD, 11 INT).