Preseason recap: Better than we ever could have hoped

Share All sharing options for: Preseason recap: Better than we ever could have hoped

With the season-opening homestand now behind us and the greatest challenge of this young season now squarely in the Cougs' sights, it seems like a great time to take stock of just where this team stands with four games in the books.

Think back to two weeks ago, as we impatiently awaited the season opener. Think about all the questions we had about this team -- and there were many. How will the freshmen meld in with the upperclassmen? Are they ready for Division I basketball? Will the defense suffer a drop with inexperienced players? How will we replace the scoring void left by Derrick Low and Kyle Weaver (and even, to an extent, Robbie Cowgill)?

And perhaps the biggest question of all ... Is it legitimate and reasonable to expect that this team could compete for the upper half of the Pac-10 and a third consecutive NCAA Tournament berth?

After four games, we don't have all the answers, but we have some strong indicators -- indicators that are far more positive than we had any right to even hope for coming into the season.

It's only four games, and it's admittedly come against some pretty weak competition, but I'm not sure that this team could have done any differently to impress even more than it has. I predicted after the first win that this team probably would have some kind of a stumble in its first four games, whether it was a close one or an outright loss. Not even remotely. This team hasn't just won four games; it has flat out dominated its opponents.

Don't think that's a big deal? Consider that Washington has lost to Portland, Oregon lost to Oakland, and a number of other Pac-10 teams have either lost to marginal big conference competition (USC to Seton Hall, Arizona to UAB, UCLA to Michigan) or hardly looked good in winning against mid-major teams (UCLA over Miami-Ohio, Arizona State over San Diego State). Through it all, the Cougs have flown under the radar while absolutely manhandling their four opponents to become perhaps the best kept secret in the nation.

We still don't know how good this team is; after all, four games at home might have masked some deficiencies, especially with young players who tend to be more swayed by emotions that the elder statesmen. But think about what we hoped for, and what we've seen so far.

We hoped the defense wouldn't take a step back with so many inexperienced players. Not only has the defense not taken a step back, it's been the most dominant in the country. Check this out (thanks to kenpom.com for the screen capture): 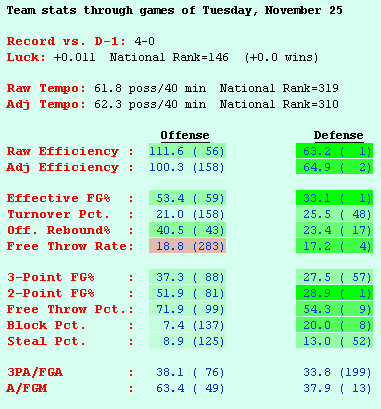 See all those dark green numbers on the right-hand side? Those are the national rankings in parentheses. The defense has been absolutely suffocating. And it's not simply because we've played weak competition; our adjusted defensive efficiency (what the Cougs would be expected to do against average competition on an average court) is only ever so slightly higher than their overall number. Now, the adjusted number can change a bit from day to day, given that we're still dealing with relatively small sample sizes this early in the season, but that number isn't a fluke -- their opponents have performed much better against their other opponents than they have against the Cougs.

These guys won't put up these kinds of insanely low numbers against the better teams on their schedule, but without having seen this defense in person, I can tell you with a great degree of certainty that these stats are telling the truth -- this is a very, very good defensive team

We hoped that the team would be able to fill the scoring void left by Low, Weaver and Cowgill. Although not as overpowering as the defense has been -- the adjusted offensive efficiency tells the story there -- it's more or less so far, so good. Taylor Rochestie has stepped up (especially in the last two games), Aron Baynes has been remarkably efficient (averaging 10.5 points in just 19.3 minutes), and Klay Thompson has been everything he was advertised to be.

Some fans have been a little down on Thompson's early performances, mostly due to missed 3-pointers. Stay patient, people -- this is a freshman who is leading this team in minutes and scoring. His shooting percentage is up to 44 percent overall, and when that 38 percent mark from 3-point range starts getting above 40 percent (as it should), he's going to really start opening some eyes. He's also quickly displaying the all-around game we expected, contributing greatly to that defense while also giving the Cougs nearly five rebounds and two assists a night.

It's a virtual certainty that Thompson won't be leading this team in minutes and shots forever, but trust me when I say that the early-season faith Tony Bennett has shown in Thompson will pay big dividends down the road.

Additionally, I think this offense is dynamic in a way that it just wasn't with Low and Weaver dominating the ball. Yes, they were wonderfully talented, but think of all the different ways this squad can attack a defense: Rochestie both inside and outside, Baynes inside, Thompson both inside and outside, Harmeling from outside, Koprivica slashing to the bucket ... there are just a lot of weapons there that all bring different things. As they showed against Sacramento State, any opponent that wants to take away one thing is going to be giving up another, and this team has the weapons to exploit it, whatever "it" is.

Lastly, we hoped this team was a legitimate NCAA Tournament contender. While obviously that remains to be seen, all signs point to this team being legitimate. Teams that are only marginally good simply don't do to those four opponents what the Cougs did to them. This team is for real. That doesn't mean it's going to be perfect; after all, none of the four wins could be considered perfect, despite some pretty near perfect stretches. This team is still getting better, especially offensively, and that ought to make you smile -- from ear to ear.

We'll learn more this weekend, but as you enjoy your Turkey Day, just remember what you're thankful for: A great coach who has put together yet another very good Cougar basketball team that has far exceeded anything we could have hoped for so far.