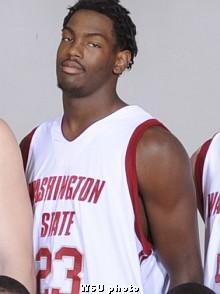 Scouting Report: When word started spreading that state player of the year DeAngelo Casto was in fact going to make it to WSU, Coug fans had to be careful to not drown themselves in a puddle of their own drool at the prospect of an athletically gifted big man making his way to Pullman for the first time since Carlos Daniel roamed the paint. Of course, Tony Bennett tried to downplay expectations, despite the glaring need for added depth in the front line. He cautioned against expecting too much out of Casto (and the other freshmen) too soon.

But after just a couple of weeks of practice, it's already become evident that the expectations of Coug fans were not without warrant. Casto's name regularly comes up with Klay Thompson's as the freshmen who clearly are standing out early on. Daven Harmeling already has called him a "freak athlete," and it's become abundantly clear that Casto is ready to contribute immediately. While his offensive game most certainly needs some time to develop, he's impressed already with his ability to rebound and block shots.

He reportedly has shown great instincts around the basket at practice, bringing an athletic element to the defense that was sorely lacking last year after Ivory Clark's departure. With a huge wing span that is considerably larger than his 6-foot-8 height and knack for timing, Casto is a shot block specialist -- something that will be huge for this team. He also is a skilled rebounder.

You simply cannot underestimate the importance of shot blocking and rebounding in the Bennett defense. The idea is always to pack it in and force teams to shoot over you, but should they get past that pack, a skilled shot blocker can cover a multitude of sins -- something that will be incredibly important with so many experienced players expected to see time on the perimeter. Additionally, the final act of defense is securing a missed shot for your offense. If he's truly as skilled at it as it sounds, he and Baynes could form one incredible rebounding frontcourt.

I typically am reserved about the expected contributions from freshmen, but I'm as high on Casto as can be and expect him to be an integral part of this team. His combination of height and athleticism make him precisely the kind of player who can have an immediate impact, even while learning the intracacies of the Bennett system.

Best Case Scenario: Casto makes such an impression in camp that he wedges his way into the starting lineup right off the bat. He becomes an immediate force on the defensive end, and actually scores a fair share of garbage points thanks to tremendous offensive rebounding skill. He also benefits from those great Taylor Rochestie wrap-around passes. He averages 12 points, 7 rebounds and 2.5 blocks a game, combining with Aron Baynes to form one of the most formidable front lines in the Pac-10.

Worst Case Scenario: Casto's biggest asset -- his athleticism -- becomes his biggest liability. He tries to block everything in sight, causing defensive breakdowns that Bennett just can't tolerate. His minutes are inconsistent throughout the year, as he show's he's just not disciplined enough for Pac-10 play. He averages 4 points, 3 rebounds and 1 block.

Likely Scenario: Bennett brings Casto along slowly, not wanting to put too much pressure on him. (Or inflate his ego.) His minutes steadily increase as he learns the ropes of the defensive system, and until he finally makes his starting debut somewhere around the Baylor/Gonzaga games. He has flashes of brilliance that will leave you with your jaw on the ground, but also lapses that make you shake your head. He'll have some silly fouls, but will more than make up for it in other ways. He averages 6 points, 5 rebounds and 1.5 blocks.