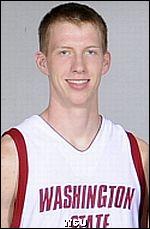 Scouting Report: Enquist is tall and light, coming to the program as a walk-on project. He spent his first year in the program getting acclimated and trying to improve, and reports are that he's improved as much over the past year as anyone in the program. The book on him is similar to the Fabian Boeke: Skilled big man, nice face-up game. But unlike Boeke, Enquist will mix it up for rebounds. He's light, so he doesn't always win the battles, but he's scrappy.

I'm not sure how much we can expect in terms of contributions out of Enquist, although I have a feeling he might be a guy who exceeds expectations, especially if Boeke's back proves to be an ongoing problem and minutes are available behind Aron Baynes, Caleb Forrest and DeAngelo Casto. Daven Harmeling says, "Without question the most improved player. From the first time I saw him play until now, he’s literally gotten four times better."

What's not said in there is that this walk-on still has a long way to go.

Best Case Scenario: Enquist proves to be a pleasant surprise, much like Caleb Forrest last year. He grows into his role, earning 5-15 minutes a night of pure energy off the bench. He grabs a couple of rebounds, and gets a few garbage points.

Worst Case Scenario: Enquist doesn't distinguish himself, and finds himself riding the pine during the games. His greatest value is in playing hard in practice.

Likely Scenario: Enquist plays a little here and there, and maybe even makes an impact in a game or two. But he's still a ways off from being ready to make an impact in the Pac-10.