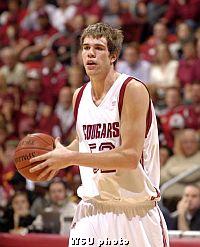 Scouting Report: Besides being 6-foot-8, Caleb Forrest barely looks the part of Pac-10 basketball player. His elbows seem to have a mind of their own, and he runs with an awkwardness that makes it look like he's always about a half second from falling down after tripping over his own feet. But for all the goofiness, Forrest exemplifies everything that's right about Washington State University basketball.

He's not an offensive force, or a defensive force. In fact, I'm pretty sure the words "force" and "Caleb Forrest" have never been used in the same sentence -- unless we're talking about Forrest's propensity to impose his will on the deer, elk and bass of the world. But Forrest always figures out a way to make a positive contribution on the basketball court, something that doesn't go unnoticed by teammates, coaches, or Coug fans.

Forrest always seems to be in the right place at the right time. He's fundamental, always fighting hard for position. He sets the most sound screens you'll ever see -- an underrated and generally unappreciated skill -- and he's unafraid to throw his body around against bigger athletes. He can't create his own offense, but he'll hit a wide-open jumper to keep defenses honest.

In short, Forrest is the guy every team should have. There are no ups and downs with Forrest; you're going to get his very best effort every night, and it's usually going to result in a few buckets and a few rebounds. And while his very best isn't all that much compared to his more athletically talented teammates, it's more than enough to make the Cougars a better team.

Best Case Scenario: Forrest does what he always does, playing with high energy and throwing his body around. However, he's gotten a little stronger, which allows him to bang a little more for rebounds in the paint. Additionally, he's extended his range to hit the occasional wide-open 3, so he scores a few more points. He plays 20-25 minutes a night, averaging 6 points, 4 rebounds ... and 1 charge drawn.

Worst Case Scenario: You get exactly what you've always gotten. Really, there's no downside here. And that's a great thing.

Likely Scenario: Forrest is a little stronger, and just a little better shooter. He gives you just a little more this year in his increased minutes, and becomes a fan favorite -- don't be surprised if a group of fans start showing up in orange vests and Cabela's hunting caps to pay homage to their favorite sportsman.