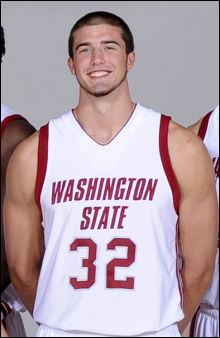 Scouting Report: Some of these player profiles are hard to write; some are easy. Daven Harmeling falls into the easy category. His value to the team is almost entirely based on his 3-point shooting. He spends almost all his time around the perimeter shooting from long range -- as evidenced by his 22.0 FT rate, which was lowest on the team -- and when he's on, he can change a game. When he's not on, he's a liability, because he's just not giving you anything else.

When we talk about a one-trick pony, this is the kind of stuff we're talking about: In 2007-08, Harmeling had easily the lowest rebounding and block percentages among frontcourt players, and also had the second-lowest steal percentage on the team. But he had the second-highest Pomeroy offensive rating of anyone on the team -- better than both Derrick Low and Kyle Weaver -- thanks to his shooting prowess.

We talked earlier about how a player needs to add something to his game each year. Is this the year Harmeling does it? The guy was a warrior last year, fighting through ankle and hand injuries to play in all but three games last year. I can't help but think that those injuries really hampered him in terms of doing other things on the floor, especially when you consider that both his minutes and points per game ended up down from where they were in 2006-07.

Because of that, there's a part of me that's excited to see what he can do this year -- especially with the added muscle. Has he added any kind of post presence? Will he be driving just a little bit more, trying to draw contact? If so, Harmeling could score more points and be a major difference maker. If he's still just a 3-point specialist ... let's just say lean times could be ahead for Harmeling. In the past, if he got hot (as he did the first four games back from that hand injury) and teams tried to squeeze him (as they did after those four games) there were plenty of other guys to make teams pay. There likely won't be that luxury this year.

This team will have to be able to count on Harmeling for consistent scoring, something it really wasn't able to do last year.

Best Case Scenario: Harmeling has added to his 3-point shooting specialty, and is able to put the ball on the floor occasionally or score in the post just to keep defenses honest. His range has extended even further, making it tough for teams to cheat on him. He even shows an improved ability to rebound with his new Hanz and Franz physique. He plays 30+ minutes a night and averages double digits in scoring.

Worst Case Scenario: He's still just a 3-point shooter. Still can't put the ball on the floor, still doesn't rebound. He'll play 30 minutes a night, but his scoring will depend largely on the contributions of others opening up the floor for him, causing wild fluctuations in his contributions.

Likely Scenario: Healthier than he was all of last year, Harmeling ends up surprising people by proving he can score in more than one way. Whether he starts or comes off the bench doesn't matter, because he's always on the floor at the end of games. He averages 10 points a night and ups his rebounding totals slightly to 3.5 a game.