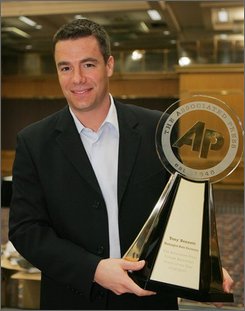 We all love watching the coaching hot seat. Grown men, making hundreds of thousands of dollars, stewing as they try to avoid being fired by an angry fan base. And to an extent it's deserved - these are guys making incredible amounts of money to do something that's a lot less important than, say, brain surgery.

With that in mind, it is time to reveal my 2008 start-of-the-season Pac-10 job security rankings. How do I come up with these rankings? Well, it's actually quite simple. If a team bombs this season, hypothetically losing every game for the remainder of the year, who is the first to get fired? In other words, who still keeps their job despite failing to live up to expectations?

And expectations are the key. It's safe to say a below .500 record is a little more acceptable at WSU than it is at UCLA. There are other factors: a coach's longevity (or lack thereof) at an institution, the preseason expectations for the team, and how delusional the fanbase or athletic department is. Among other considerations.

So there you have it. #1 is the least likely to get fired this year. #10 is the most likely. Feel free to agree or disagree with me as much as you like in the comments.

1. Tony Bennett, WSU. Tony gets the nod over Ben Howland for one simple reason. If both UCLA and the Cougars lost every conference game this year, who would most likely be fired? It's Howland, because UCLA has the burden of very high expectations.

Tony finds himself in an ideal situation at Washington State. An adoring fan base. A sustainable program. Reasonable expectations. The honeymoon period for Tony Bennett started when he took over, and is still good until about 2038. Dick and Tony Bennett resuscitated a program that was never really alive to begin with. For that alone, Tony is as safe as you can be in a college coaching job.

2. Ben Howland, UCLA. Make three straight Final Fours, and you're probably a decent coach. Of course I still don't feel Howland gets his due, mainly because he hasn't won a national championship. But that's absurd. The NCAA tournament, as much as we love it, is one of the biggest crapshoots in all of sports. It's completely unpredictable. You have to be lucky and good if you want to win it. UCLA has been good, they just haven't been lucky enough to make it over the top.

And I like Howland's style of play. It's like if WSU had a bunch of five star recruits and an endless pool of talent to draw from. They focus on defense and fundamentals, all while finding players who can't help but succeed in the NCAA. I explained why Howland comes second to Tony earlier, and it's just an occupational hazard of UCLA. Sometimes, you can be a great coach and still not be good enough. Without a national championship, that's the situation Howland finds himself in at times.

Think NC State regrets firing this man? Sendek has worked his way up to the three spot by way of exceeding the very reasonable expectations of the Sun Devils' fans. But now, can Sendek deliver with James Harden and a preseason Top 25 squad? Time will tell. If ASU disappoints, expect him to drop a couple notches.

Nevertheless, it's phenomenal for a coach like Sendek to hop right in and wrestle state supremacy away from the Arizona Wildcats. It says a lot about the direction both schools are heading.

Floyd checks in at #4 thanks to a herculean recruiting effort and a revitalized USC basketball program. Well, maybe I should qualify that recruiting statement. After all, O.J. Mayo recruited USC, and not the other way around. But with Demar DeRozan coming in this year to an already talented roster, USC looks like a solid bet for another tournament appearance. And you have to respect a guy who can get a verbal commitment from Lil' Romeo.

Monty at #5 seems a little high, but that's because first-year coaches get a nice little honeymoon period. A few losses here and there for Cal this season won't effect Montgomery's status. After all, this guy owns the Bay Area. Think about it: in one decade he's coached Stanford, Golden State and now the Golden Bears. It would be a shock if Mike doesn't have success with those crazy hippies from Berkeley. [calm down Cal fans, it's a joke]

The question that Montgomery will have to answer in the next few years is this: can he elevate Cal to the elite status that Stanford once held? Hmm. One thing's for sure; his hands won't be quite as tied by academics as they once were with the Cardinal.

Hang in there, folks. We're in for a year of storyline overload. Every time someone even mentions OSU basketball this winter you will get the obligatory, "Craig Robinson is Barack Obama's brother-in-law!" story. I've already seen two separate ESPN pieces on this, and the season hasn't even started yet. And yes, it's cool, and interesting that he's a legal relative of the most powerful leader in the world, blah blah blah. But could you please talk about something else? Anything else? Even Craig Robinson is going to be tired of Craig Robinson stories.

Here's one interesting tidbit, though. Robinson listed Obama as a reference on his application for the Beaver job, and OSU athletic director Bob DeCarolis didn't even bother to call him. What the heck? You're hiring a relatively unknown coach, have the chance to talk to the potential leader of the free world, and you don't take that chance? If you ever needed an indication that the OSU program was bent on sacrificing basketball in favor of football, this is it. Or maybe it's some devious plan to corner recruiting by having the President of the United States place well-timed phone calls to all of next year's McDonalds All-Americans.

JD is our lowest ranked new coach, because he has to deal with the highest expectations. The timing isn't great for Dawkins. He made the leap from Duke to the Cardinal right as the Lopez brothers were exiting stage left, and as Montgomery shockingly jumped across the bay. Stanford is in a curious position. If Dawkins can be successful, people will forget all about the strange Trent Johnson affair last Spring. If he isn't, well, I think there will be one more AD out of a job.

The fact that Romar can be number eight on this list says a lot about how safe the majority of this conference's jobs are. But this season could be the one that puts Romar on the hot seat officially, especially with an early loss at Portland and a chance to botch Jon Brockman's one last shot at glory.

Still, there's no way Romar gets canned this year. Would you fire a coach that just landed Abdul Gaddy? It's that kind of recruiting that keeps Lorenzo firmly entrenched in Huskyland, and hopefully it's the underachieving of his rosters that keeps the Cougars' seven-game win streak going.

Did you know Kent is the longest-tenured Pac-10 coach? WIth 12 years under his belt and Lute Olson in retirement, Ernie gains seniority over every coach in the conference. Not that it means a whole lot. Oregon has been surprisingly patient with Ernie - this despite scandalous events, occasional losing, and an inability to keep elite Oregon players within the state.

Every year we get the obligatory "Mark Few to Oregon" rumor, and I doubt this year will be an exception. Especially if the Ducks miss out on the Big Dance. Still, with two Elite EIghts under his belt and Michael Dunigan roaming the paint, it's hard to believe Oregon will be a pushover this year. Can Kent make it to the opening of Oregon's new arena? At this point, I have to believe he controls his own destiny.

Poor little fella. On the bright side, he gets a chance to earn the Arizona coaching job beyond this year. The bad news being that it will be darn near impossible to do it. Arizona wants a big name head coach to replace the legend that was Lute. And when they failed to lock up Mike Dunlap to the head coaching job, a strange situation got even stranger. It is entirely possible that Dunlap coaches under Pennell this season, and then reverses roles next season. More likely, however, is the prospect of Arizona making a run at Mark Few, failing, and then throwing an extravagant amount of money at anyone who will listen.

Again, I don't envy Pennell's position. At the same time, he is almost guaranteed an assistant coaching job at U of A, or any other school, beyond this year. And he gets to coach one of the "elite" programs in college basketball for at least one season. So it's hard to feel too bad for the guy.