Share All sharing options for: Final thoughts on Baylor 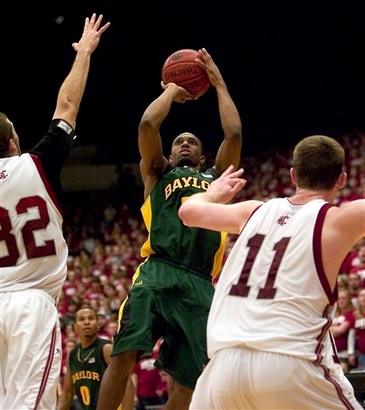 Before we turn our sights squarely to Gonzaga, I just want to put a little bit of a bow on the Baylor game with some final thoughts.

First off, as I think Grady detailed well, there are many more positives to take from this game than negatives. The Cougs were right there with Baylor, blow for blow, against a team that clearly wanted this one badly. They were a few missed layups and a handful of missed free throws away from beating the No. 24 team at home. As it was, they might have forced overtime if it weren't for two circus shots by Henry Dugat.

I point that out not to raise your frustration level all over again -- and trust me, nobody was more frustrated than me; just ask my wife who had to try and catch up with me as I stalked out of the bar with 18 seconds to go -- but to show you just what it was that separated WSU from a good, deep, experienced Baylor on Saturday: Correctable mistakes that aren't likely to be repeated.

Do we wish that Baylor hadn't been allowed to post a ridiculous 62.5 FTR? Sure. But the Bears have gotten to the line on everyone they've played. (By the way, that FTR drops to a bit more palatable 52.5 when you take away those four intentional free throws at the end.) Do we wish that DeAngelo Casto wasn't, to borrow a phrase Jo-Jo texted me on Saturday, "allergic to points?" Yup. But he's not going to miss those close shots every night. Do we wish we could make a few more free throws? Absolutely. But we were shooting 73 percent before Saturday night's abysmal 63.2 percent.

The best thing to do is remember: In what was supposed to be a rebuilding year, we have been right there with two quality teams. Now we just have to learn to get over the top.

The defense continues to show that it's for real. The raw efficiency numbers don't look great -- the Bears still put up a 100 OE before those last free throws -- but a deeper look inside the four factors reveals a lot. Yes, the FTR was absurd, but when the Cougs kept the Bears at bay and forced them to shoot contested jump shots, they were successful -- Baylor shot just 46.3 effective field goal percentage, well under their season mark of 55 percent. The Cougs also forced more turnovers than the Bears generally commit, and did a great job securing defensive rebounds.

As Bennett mentioned after the game, there were some breakdowns that probably made the team sick when they watched the film, but outside of that, this team was really good defensively and will continue to get better. That ought to scare the rest of the Pac-10, which I'm sure was hoping it was getting WSU on a down year.

DeAngelo Casto is awesome. Period. Forget the missed layups, forget the missed free throws. He is bringing an energy and athleticism to the defense that hasn't been seen in years, and it's going to translate into some offense soon.

Of course he draws comparisions Ivory Clark, but Clark was only 6-foot-6 (although with a tremendous wingspan). Casto is bigger at 6-foot-9, quicker, and a way better rebounder than Clark ever was. Once he truly learns the defensive system, he's going to get so many weakside blocks it'll be ridiculous. He also can guard multiple positions. His job on Sam Young in the second half against Pitt was an eye opener, and his extended minutes Saturday were indicative of how he was playing, not some kind of necessity.

Casto still makes his share of mistakes, but the potential is undeniable -- enjoy it as it unfolds before your eyes rather than getting frustrated by what he's not doing.

The offense scored points without any help from Klay Thompson. The offense still was below average in terms of efficiency (90.5), but one or two more made shots (or free throws) down the stretch and we're talking about an efficiency around 100. That ought to be the goal for this team, because if it can hit that 100 mark with the defense it has, it's going to win a heck of a lot of games.

We've talked a lot around here about the need for a third scorer, and for a night, it was Daven Harmeling, who was aggressively looking for his shot last night. I don't expect that Harmeling will be "feeling it" to the tune of 4-of-5 from 3 every game, but for a night, he was huge. The question becomes, of course, will Harmeling keep pumping it even when he misses a couple? Let's hope so.

Again, let it sink in: This team was in position to win a game against the No. 25 team in the country with its leading scorer going just 2-of-5 for four points. Do not, whatever you do, minimize what the other guys brought to the table on Saturday.

There also were some negatives, although nothing to get too alarmed about at this point.

I'm a little surprised at how easily Klay Thompson was taken out of the game. I did predict that teams would try to eliminate either Baynes or Klay on offense, and given Baylor's personnel, it's not surprising they chose Thompson. However, I certainly didn't think it would be so complete.

I think there's plenty of blame to spread on this one. First, Baylor deserves a lot of credit. But beyond that, I think Thompson was way too passive. The Bennett system can sometimes lead a player to do that -- remember all the times we'd yell at the TV for Derrick Low to be more aggressive? -- but Klay just has to look for his shot a little more. When teams crowd him like that, he's got to be able to put the ball on the floor and draw the defense.

Additionally, look for Bennett to devise some ways to free up Klay when teams do what they did last night, which they surely will since there are no secrets with game tape. More screens, some post ups -- remember, despite being light, the kid is 6-foot-6 -- whatever it takes to get the ball in his hands in scoring positions. You can bet Bennett will have a plan in the future.

But let's make one thing clear: This developement doesn't concern me one bit. Klay will learn how to get his shots within this offense, and given the innate basketball knowledge he clearly possesses, bet on this evolution happening fairly quickly. (It might be a bit much to ask for that evolution by Wednesday, though. Pac-10 play is probably a more likely goal.)

Did you see all the minutes logged by the starters? Here are the minutes in Saturday's game:

This team can't be successful long term if it has that kind of minutes played every time we're in a close game. This is something to keep an eye on.