Not too long ago, I proclaimed that Pitt would probably be the best team we'd play all year. I'm beginning to wonder if I shouldn't rethink that statement.

Gonzaga is currently rated No. 3 in the country by Ken Pomeroy, and was No. 1 just about a week ago. Obviously, it's still early and we're dealing with small sample sizes, but this isn't a fluke. As usual, the Zags are in the midst of one of the toughest nonconference schedules in the country, and the Bulldogs have dominated. The talk of this being Mark Few's best team is not exaggerated.

What's been the difference? This: 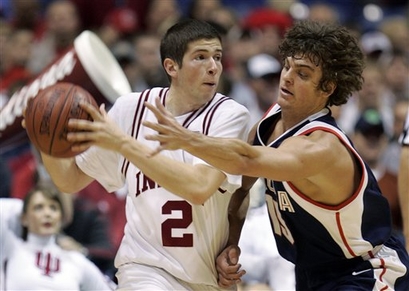 This year has been vastly different. Gonzaga has held every opponent under 100 efficiency, including Tennessee -- 97.1 against the Zags vs. 122.3 overall adjusted for the Vols.

Of course, the offense is awesome as usual, and if it wasn't for a so-so performance on the road at Indiana marked by uncharacteristically poor shooting, Gonzaga likely would still be on the top of those Pomeroy ratings.

This is one of the reasons I was so frustrated immediately in the wake of Saturday's loss: Gonzaga is really, really good, and if it's not the best team we'll see all year, it certainly is the most complete and versatile. We probably don't have much of a chance against yet another team with payback on its mind, and it sure would have been nice to get a win against a ranked opponent.

But, then again, we didn't think we had much of a chance two years ago, either.

P.S.: If you're looking for great online coverage of the Zags, visit The Kennel Report.