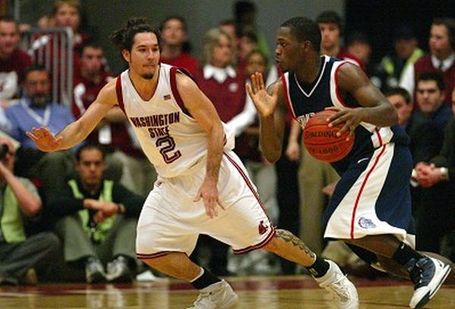 I may as well admit it now.

Now before you call me a hypocrite, realize that I know what side I'm on tomorrow. I'm not a sports polygamist - it's the Cougs first, and everyone else long after that. But in every game save one, I root for the Gonzaga Bulldogs.

It's hard not to be a fan of the Zags when you're a kid growing up in Spokane. I was in Junior High during the Zags' Elite Eight run. The city stops for GU basketball - classes went on, but our attentions were drawn to the TV set. The more academically-minded teachers simply kept the game on mute while we did some busy work that could just as easily be accomplished later on that night.

I liked the Zags for the same reason every one else in the country does, a reason that simply isn't true anymore. They're the underdog. The lovable tiny religious school that somehow rose up and overcame impossible odds to become an elite D-1 program. Casey Calvary, Blake Stepp, Mark Few, Matt Santangelo. The names of the Zags are names of local heroes in Spokane. Dan Monson spoke at my aforementioned junior high. My senior year at Central Valley, I watched a buzzcut-sporting Adam Morrison dominate my alma mater's team in our home gym. [I also watched a younger, less refined Josh Heytvelt come up from Clarkston, and by the way neither Morrison nor Josh looked as good as DeAngelo Casto did last year - seriously] It also helps that my cousin played high school ball and is good friends with some guy named Dan Dickau. I bring that up because it's about the only celebrity connection I have, other than when Tony stops by my place of work in Pullman.

I became a Coug when, well, I became a Coug. Gonzaga didn't have any of the programs I was interested in, and I wanted to travel a little way from home, even if it was only 80 miles to Pullman. It helps enormously that I came to WSU at the exact same time Dick Bennett did. I feel linked to the elder Bennett's teams for that reason. Dick gave hope to a program that never had a reason to believe in itself. If all went according to plan, he could hand off the team to his son, and the ball would be rolling. There was always skepticism about whether that would happen - and you'll be hard pressed to find anyone who thought it would work out as well as the way it actually happened. After WSU's collapse down the stretch in Dick's last year, it felt like the turnaround might still be quite a ways away. It wasn't.

But I didn't fall for the Cougars that won, rather the Cougars that lost. The most important game of the Bennett era, the one that told us in the first year this crazy thing might just work out, was a loss. And the worst loss I've ever experienced in person. It wasn't the losing I was drawn to, obviously. It was how the team lost. They fought. They played defense. They battled. The talent on Dick's first team couldn't even sniff the first round of the NBA draft, and yet that team had #1 Stanford beat. Dick developed players - he took Thomas Kelati and Jeff Varem from unkowns into savvy players that actually had a shot at the next level. He turned Derrick Low and Kyle Weaver into... Derrick Low and Kyle Weaver.

And while Dick was building up the Cougars with defense and character, Gonzaga was becoming increasingly deficient in both. The 2-3 zone used to be a way for the Zags to even the playing field against physically superior teams. Now the physically superior team, GU started relaxing on D and allowed any WCC opponent to have a shot at beating them just by draining their threes. Gonzaga also developed a "we're better than you and we know it" attitude, as evidenced by Micah Downs' proclamation that WSU was the second-best team in the state last fall. The Zags had become the Yankees of the WCC. They started making Sportscenter's Top 10 lists regularly (although they were often left off unfairly due to their late start times). They suddenly became everyone's biggest opponent. They had drug arrests (a surefire sign of a program that's hit it big, as evidenced by Mike Harthun's recent brush with marijuana). They had that swagger that is always synonymous with something like USC football.

It's not that those things made the difference in my rooting for WSU - they didn't. But I learned to love WSU's style of play, not the resulting wins or losses. And as a student/alumnus I am tied to Wazzu in a way that I'll never be to Gonzaga. I'm still a fan of the Bulldogs, and I'm still thrilled with all the talent they've success they've had. I'm still afraid Mark Few will make the mistake of his career and leave for Oregon, or Arizona, or wherever. I was about ready to murder Gus Johnson just for making the call on the UCLA disaster in the tournament. I'm still frustrated they've continually failed to live up to their NCAA tourney seed in recent years, despite an unbelievable amount of talent. I get excited when they have a huge victory, and disappointed when they let someone like Stephen Curry tear them to shreds.

One thing I don't get is the heated "rivalry" between WSU and Gonzaga. Spare me. Seriously, a "F*** Wazzu" chant from the Kennel Club? The same chant, only reversed, from the ZZU CRU? In my first three years in Pullman you were much more likely to see someone wearing Gonzaga basketball gear on campus than the Cougar alternative. We should be united in our common hatred of all things Husky, and we should be grateful that our programs can coexist in the Top 25, rather than fighting amongst each other for tournament seeds and conference titles. Sure, it's a fun rivalry, especially when we're both this good, but let's tone down the intensity. UW is worse. To both of us. This despite the fact the Huskies are 1-15 in their last 16 meetings with WSU and Gonzaga.

Where was I? Oh yeah, the game tomorrow. Of all my years cheering on the Zags, this may be the most talented roster they've ever put on the floor. Jeremy Pargo is a first-round pick, and Josh Heytvelt could be if he gets back to his form from two years ago. Matt Bouldin is a skilled passer and shooter, and doesn't have to deal with Kyle Weaver this time. Austin Daye is a first-rounder somewhere down the line. And just when you think they've lost somebody important, they bring in another recruiting class of excellent (yet somehow underrated by the recruiting services) ball players. Watch out for Steven Gray and Demetri Goodson.

And guess what? As Nuss mentioned earlier, they play good defense now. If you want to know why GU is off to such a hot start this year, and why UW has played us so much closer since the 75-47 thrashing, it's defense. Just because a team plays uptempo doesn't mean they have to sacrifice defense. This will be exactly like the Baylor game. If we can keep the Zags in the fifties, we have a chance. That doesn't mean we'll win, it just means we have a chance. Like last year, and the year before it. It's going to be a close game, hopefully. It's going to be fun.

Eight regular players on the Zag roster have eFGs of 49% or higher. They have six that are averaging double figures in points per game. They are more athletic top to bottom than WSU, and it's not even close.

Still, Wazzu has a chance. Two chances, actually. The first is defense. GU is notorious for committing offensive fouls in the WCC. Also, with so many players scoring so much, it will only take a couple of Tony's defensive "gaps" to frustrate the Zags into some serious problems. Finally, the Zags are quick enough on offense to be prone to turning the ball over - that's a big opportunity for us. The second chance comes in 3-point shooting. I still think we can attack Gonzaga here, and if we do we can overrule them in eFG%. As for the other factors, we must rebound in some capacity, and we absolutely have to get to the line. We have to limit our own turnovers.

My X-factor for this game is the guy who made it happen two years ago, Daven Harmeling. If he shoots threes, great. If he makes them, we're in business.

And I'm not much of an "intangibles" person, but Beasley is going to be rocking tomorrow. Incredibly, the Cougars are 13-10 against GU since 1980. Don't underestimate the power of Friel Court. The Zags are only four point favorites - if that doesn't say something about home court advantage, I don't know what does.