Remember, it could be A LOT worse

Share All sharing options for: Remember, it could be A LOT worse 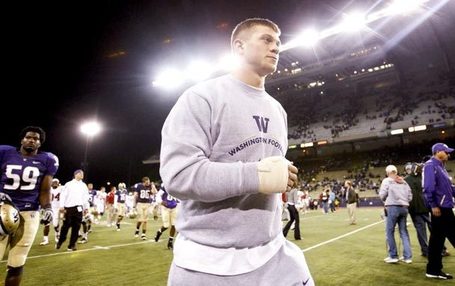 I'm working on a post for later today to put Saturday's "performance," which I was lucky enough to witness in person, into a little better perspective. But if you're really upset about Saturday, or the season in general, just remember: It could be worse. A lot worse.

You could be a Husky.

As if just being a Husky in the first place isn't bad enough, consider what our life could be like.

We could be on year four of a rebuilding project in which our coach is 11-29 while making $1.4 million a year, leading to Web sites like this one and intrepid entrepreneurs producing products like this.

We could have lost the only player on our roster worth a damn for six weeks -- or more -- virtually guaranteeing the losses will continue to pile up.

Our stadium could be crumbling.

Our fans could be so disillusioned that we regularly don't even come close to filling our 70,000-seat stadium in a region of well over 1,000,000 people.

Yes, Saturday sucked. But just remember: It could be worse.