In search of an effective Taylor Rochestie

Share All sharing options for: In search of an effective Taylor Rochestie 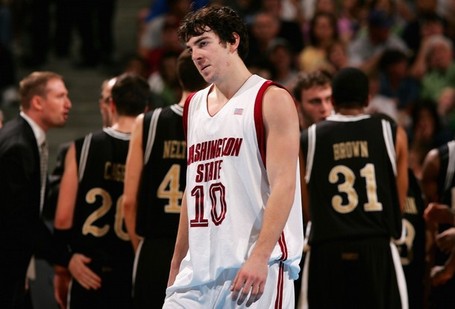 Before the season started, I wrote that Taylor Rochestie holds the key to the Cougars’ season more than any other player on this roster. I felt pretty good about the prospect, given that Rochestie’s been as steady as a rock over the past two years. And while some guys shrink in the face of that kind of challenge, if anyone seemed to have the makeup to relish the progression from complimentary player to lead point guard, it was Rochestie.

So far, it looks like we couldn’t have been more wrong.

No player more exemplifies the Cougs’ struggles on offense than Rochestie. Point guards are evaluated not just in terms of their individual contributions, but in terms of the offense’s overall effectiveness. With more than one third of the season already gone – and the entire nonconference schedule now behind us – Rochestie has failed to live up to expectations on both counts. His play has dipped in virtually every measurable way, as he has been unable to cope with the pressure of an elevated role.

This offense is easily the worst of the Tony Bennett era, and it’s not even close. Against "like" competition this year – , Pitt, Baylor, Gonzaga and LSU – the Cougs have posted an average offensive efficiency of just 84.4, with a high of only 90.9 against MSU. For a little bit of perspective, the WSU offense was held under 90.9 just three times in 2006-07 and twice (Gonzaga and North Carolina) last year.

Let that sink in for a second: Something that happened just five times in Tony Bennett's first 69 games has now happened five times in the last 12. If this team is to have any prayer of competing for a spot in the top half of the conference this year, it's got to start being a better offensive team against Pac-10 caliber competition.

Now, there’s clearly less talent on offense this year (or, at least, Pac-10 ready talent) with Derrick Low and Kyle Weaver gone, so certainly not all of this can be laid at Rochestie’s feet. But a good portion of it can.

A point guard’s primary responsibility is to set up his teammates. It’s not just getting the ball to them in the spots from which they can score, but it’s also getting it to them in a manner they can handle. It’s thinking teammates first and yourself second, a role Rochestie embraced over the past two years playing next to Low and Weaver.

Now? It’s Rochestie first and teammates second – with disastrous results. It wouldn’t be as big of a deal if he were scoring with any kind of efficiency (although, I’d argue it would still be a big deal if he was, as we’ll get to in a second). But he’s not. Check out the contrast in his stats against "like" competition from last year to this. (I tried formatting it in a readable way, but I just couldn't get it all to fit and still be readable. Click on each image to see a full-size view.)

So, just to recap: His shot attempts are way up, but his effective field goal percentage is way, way down, leading to his points being down; his assists are down, but his turnovers are way, way, WAY up. (On the bright side, his rebounds are up. Nice!)

You'll note that his 3-point attempts are actually down, meaning that while the missed 3-pointers are a problem, the main issue is coming from missing a lot of 2-point attempts. I think that's revealing, and we'll come back to that in a second.

For most players in a similar situation, you could chalk all of this up to simple selfishness. I’m certain that’s not the case with Rochestie. In fact, I think it’s probably the opposite: He wants so badly for this team to succeed that he’s taking the entire burden of an offense that is struggling on his own shoulders by increasing his shots with each passing game. In a senior year that is probably his final year of organized basketball, it’s admirable … but misguided.

Here’s the gigantic problem with Rochestie taking 12 shots a game: He’s the only guy in this offense with the ability to make plays for his teammates.

While we do miss the scoring punch of Low and Weaver, I’d argue we miss them most in their ability to make plays for other guys. Remember the offense two years ago? Low and Weaver had yet to emerge as consistent scoring threats, yet its effectiveness was only a shade under last year’s offense. And for 30-35 minutes a game last year, the Cougs had three guys on the floor capable of not only scoring off the dribble, but breaking down an opponent and setting up a teammate with a quality pass. Those two guys, along with Rochestie, made that offense – which was one of the best in the nation in terms of efficiency – go.

But this year’s team lacks those playmakers and scorers. While Marcus Capers, Klay Thompson and Mike Harthun might become those kinds of guys eventually, they certainly are not there yet. And in truth, I think Rochestie actually could be a legitimate primary scoring option – seriously, does anyone think he’s really as bad of a shooter as he’s been this year? – if he had a playmaking point guard next to him. (Xavier Thames, why couldn’t you be a year older?) But he doesn’t, and isn’t going to.

So, what can be done? The solution is threefold.

First, Rochestie needs to change his mentality on the floor. The fact that he's attempting so many more 2-point shots this year means that when he's getting into the lane, he's first and foremost trying to score. And while there certainly is nothing wrong with him taking shots if he’s efficient with them, but as we’ve established, it can’t come at the expense of other guys.

There are guys who can go into the lane with the intention of scoring and adjust on the fly, but those are usually guys with the athleticism to cause breakdowns in the defense all by themselves. (Kyle Weaver, anyone?) Rochestie, who’s generously described as "crafty," is not that guy. When he drives into the lane, he needs to do it first with the purpose of getting a teammate a quality shot – as he did the last two years – and take a shot only if it presents itself as a high-percentage option.

Second, Rochestie needs to trust his teammates again. He is playing like that guy at the (or P.E.B. back in my day) who passes the ball the first three possessions, watches teammates miss shots, then shoots the ball every time he touches the ball for the rest of the game, thinking he can do it better.

I firmly believe that all those shots Rochestie is chucking up speak volumes about just how much faith he has in his teammates at the moment, and it starts to become a self-fulfilling prophecy. With every shot that Rochestie takes, his teammates stand around more and more, either consciously or subconsciously working just a little less hard for their good shot because the ball probably isn’t coming their way. Nothing breeds confidence in other players like continually feeding them the ball. Rochestie needs to be the guy you love playing pickup ball with.

Lastly, let’s spread the blame a little. Rochestie’s teammates need to start doing some things to make his life just a little bit easier so that he doesn’t continue to feel like he has to do it all alone. About the only two guys that don’t need to change a thing are Aron Baynes and Caleb Forrest, who cannot do any more than they’re already doing.

But it’s completely unacceptable for Daven Harmeling to go an entire game without taking even one shot. I know LSU dedicated a defender to Harmeling, but there’s a mentality a shooter has to have that he’s going to get some shots no matter what, even if that means taking a bad one occasionally. Klay Thompson must be more assertive within the offense and work harder against teams that want to take him away. He needs to look for opportunities to take the ball to the rim. Nikola Koprivica needs to move more without the ball and stop blowing layups. DeAngelo Casto needs to concentrate on catching passes and dunk a ball once in a while.

If this team has any shot to finish in the top half of the Pac-10, its offense must improve. And for that to happen, Rochestie’s got to start being the distributor and facilitator this team desperately needs, and his teammates need to do their part to increase his confidence in them.