Coug of the Year has reached the semi-finals. First, a bracket check:

It's an all Cougar basketball final four - and, just like you'd expect in real life, Tony Bennett put on a defensive clinic to defeat eight-seed Matt Potter, 54 to 4. Wow.

Can he stop upstart center Aron Baynes, who carries the hopes of the entire nation of Australia with him? Can you hear, can you hear the thunder? 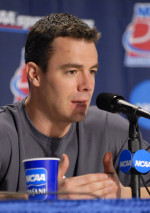 Argument for: Coached the Cougars to the Sweet Sixteen and their second straight NCAA tournament. Responsible in many ways for turning WSU from perennial doormat to Top 25 team and successful, sustainable program. Clearly not motivated by money or "prestige" jobs, Tony turned down Indiana and a host of other schools to remain the coach of the Cougars. Followed last season up with the arrival of the best recruiting class to hit Pullman in at least a decade, headed by Klay Thompson and DeAngelo Casto.

Argument against: Is there one?

Argument against: No Bennett, No Baynes.