MAILBAG: On the futures of two key Cougs

Share All sharing options for: MAILBAG: On the futures of two key Cougs 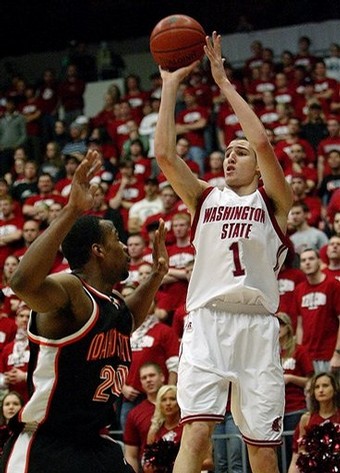 I put out the all-call for mailbag questions earlier this week, and much to my amazement, two of you were awesome enough to respond! Either you're an unmotivated bunch, or we just do such an amazing job talking about everything that matters that you don't have any questions left. I'll choose to believe the latter.

Let's get on to the first question:

This is a lot of speculation and I know we hate looking forward this much (right?), but if Klay keeps up the level of play we have seen from him so far, how long do you honestly expect him to stick around?

You're right -- it's pretty premature, because we just don't know how Thompson is going to develop. But I'll take my best shot.

There's no chance he leaves before his junior year, and I'd be fairly shocked if he doesn't stay all four years. Thompson just isn't the transcendent athlete that the NBA loves. He's not exceptionally fast or quick and he doesn't jump out of the gym. There may come a day where he becomes a savvy, dynamic, unstoppable scorer -- something that got Adam Morrison the No. 3 overall pick without great athleticism -- but clearly that day isn't here yet. His outside shot is still too inconsistent (just 36.1 percent on 3s) and he doesn't take the ball to the rim nearly enough (just 20 free throw attempts all year). Even if he transformed into that next year, which is unlikely, his physical abilities just wouldn't be enough to truly captivate NBA scouts.

Another thing to consider is that Klay isn't some urban kid who's focused on cashing his first big payday as soon as possible. With a father who played in the NBA -- and all the money and front office connections that come along with that -- Thompson can afford to wait until he's truly in a position to not just get to the NBA, but to maximize his professional career.

Bottom line? I just don't see him even sniffing the NBA after the next 12 months. Look at a guy like James Harden -- that's a guy who will be leaving after his sophomore year, and Klay's just not even sort of in that league yet. He might get there after his junior year, but my guess is that he sticks around for all four years.

As a side note, if he does stay for four years, it'll be interesting to see if he can make a run at Isaac Fontaine's career scoring mark. It'll be tough, not just because of the pace the Cougs play under Bennett, but also because the motion offense naturally distributes the scoring load. But if he becomes the scorer we think he all will be, it could be fun to watch.

If Tony Bennett does accept an offer somewhere, who's his replacement?

I always love questions like these, because it just shows what an incredibly insecure, worrying bunch we Cougs are. (With good reason, of course.)

Tony just operates on a different set of values than virtually every other coach. I don't want to speak for Tony's personal faith, but I can tell you that Bennett and I have a lot of shared values based on our common faith. And while it's hard for most people to believe that money and fame aren't the most important things to him, it's entirely plausible to me. I think he's proven by now that he's just not a "grass is greener" kind of guy. He believes in what he's doing, and believes that if he keeps doing the right things, the right next opportunity will open up for him at the right time.

On a personal level, Tony also has expressed a lot of gratitude for the opportunity he was given at WSU, and I think he really wants to see if he can build something special here. That building is only getting started, likely resulting in a missed NCAA Tournament this year and next. But in two years? I know that's far away, but that team could be downright scary. If he's going to leave at any point, that's probably it -- when the team has been successful, the recruiting cupboard is stocked, and the next coach is going to be in the best possible position to carry on the work.

Since that's so far down the line, it's really hard to speculate who might take over. But the obvious choice seems to be assistant coach Ben Johnson -- if someone else doesn't snatch him up first.

But let me part with this: If Bennett decides to stick around after that 2010-11 season, there's a good chance he really sticks around. I'm talking about a Lute Olson-like run. I wouldn't say that's likely, but I also honestly don't think that's as far-fetched as everyone wants to believe.

We'll hit up the mailbag again next week. Fire off your questions to cougcenter(at)gmail(dot)com when they pop into your brain over the next seven days, and we'll pick the best ones.