Is the defense really better?

Share All sharing options for: Is the defense really better?

Yet, there's been this feeling that the Cougs are getting better on the defensive side of the ball, a seemingly counter-intuitive stance. So, I went in search of some statistics that might bring some clarity to the situation, and settled on a pair that I think do, in fact, show progress.

Before I get onto that, just one qualifier: I'm not intending to make grand sweeping conclusions for you. I'll give you my impressions, but leave it up to you to interpret the data as you wish. I'm mostly hoping to start a conversation.

First, I looked at total yards given up by the defense.* Sometimes, the numbers over the last year and a half could be mind-numbing in their enormity. They seemed big, using round numbers like 400 or 500 yards. But a lot of times we would hear qualifiers like, "Well, 'X' team does that to everyone, so of course they lit up the Cougs."

* I recognize a bit of a flaw in my methodology here in that raw stats such as total yards often aren't the best measure of the quality of a defense (Howie Stalwick, please take note), given that so many factors can influence the overall yards. Yards per play would be better, and something like the NFL's DVOA would be best. However, the yards per play would have been a lot of work on my end, and there is no DVOA for college football (yet). So, for the purpose of this examination, I think total yards provides a good enough snapshot.

So, the question became how to put into context just how much they lit up the Cougs. What I settled on was calculating the percentage above (or, in rare instances, below) their normal total yardage output the Cougs' opponents put up against them (I didn't include Portland State): 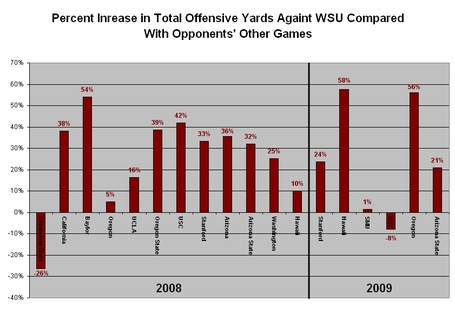 A few things stick out to me. Yup, things were really bad last year. There were six straight games there in the second half of the season where the opponent exceeded their normal output by 25 percent or more. (I suppose we should have believed Mike Gundy last year when he said his team's performance had more to do with them than us.)

However, this year is looking better (with the understanding that we're still dealing with relatively small samples). Yes, there are two super awful performances, but there are two really good ones in there, too. And the two in the middle are still bad, but not horrendous. And the super awful performances came against those dreaded spread, lateral speed teams. (SMU also fits into that category, but it was pretty clear they didn't possess the same kind of athletes on that side of the ball.)

To what can we attribute this seeming improvement? Beyond players being older, and adding in guys like Travis Long, Bernard Wolfgramm, etc., how about this? 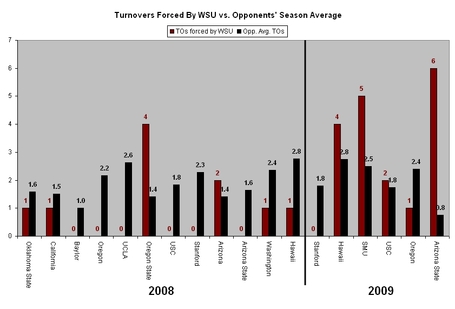 Those red bars are turnovers forced by WSU. Only twice last year did the Cougs force more turnovers than their opponents' average against their non-WSU opponents. This year? Again, small sample size, but it's happened four times, as we've already exceeded last year's entire total in turnovers forced -- by a lot -- in six games.

I wrote a post earlier this year taking people to task for not giving the defense enough credit for the turnovers it forced against SMU, and I'll reiterate the point here. All those turnovers this team is generating are not an accident, folks. As much as we get on the coaches for certain things, this is one area where you have to give the coaches a ton of credit. Ball-hawking defenses don't just happen. They're taught, because it's an attitude.

Perhaps we should have seen this coming. In doing my research, I couldn't believe how many times I saw the the team had forced two or three fumbles in a game and failed to come up with the ball. Turns out, the team forced 16 fumbles against non-PSU competition ... but only recovered two(!) of them. This year? That number is 15 and 11. To put in perspective what a dramatic turnaround that is, consider this: Our 2008 recovery percentage of 17.65 (including the 1-for-1 vs. PSU) was 120th (out of 120); our 2009 recovery percentage of 73.3 is 13th. Could there be some regression, since some of fumbles is bounces and such? Sure. But that kind of a turnaround is, again, no accident.

What's encouraging about this is that if you're physically overmatched, one way to make up for it is to somehow get the ball back and stop a drive -- whether it's early or late in the drive is inconsequential. This team has done an amazing job of that, and if the offense can ever sustain some drives, you might see some of those yardage numbers come down, too.

Obviously, time will tell if some of this stuff holds up. The 2009 percentages will change, and we'll have a better picture by the end of the season of what really happened in those games. But for now, these signs are, in fact, positive.