When it comes to the Heisman, one man stands above the rest

Share All sharing options for: When it comes to the Heisman, one man stands above the rest

A few days ago, my fellow author Nuss wrote this cute little post proclaiming Reid Forrest to be "better than your punter." Now we all know that Nuss writes eleventy billion posts a day in hopes that one will stick, and the problem is some of those posts show a lack of research and analysis that you, the readers, expect from CougCenter.

But I digress. The reason I'm taking Nuss to task on this is not because he was wrong. It is true, Reid Forrest is better than your punter. Seriously though, is that really an amazing revelation? That is similar to saying "water is wet."

I want to take it a little further. Reid Forrest is not only the best punter in the land, he is the best PLAYER in the land.

What's that you say? What about Tim Tebow, Colt McCoy, or even that receiver from Notre Dame that sounds like he is out of a fairy tale? Sure, those players are great. They are just not even close to the level of great that Reid Forrest possesses. For instance, check out this chart: 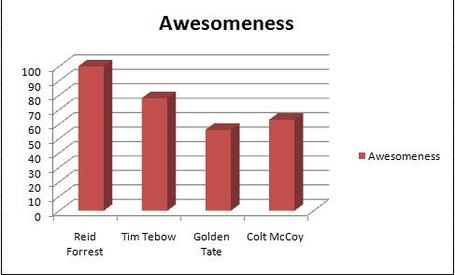 Now if Reid Forrest's perfect score of 100 in the "awesomeness" category does not impress you, then there is something wrong with you. If there is something wrong with you, I will offer up this next table of statistics, which will show you exactly how much better Reid is than the rest of those no-talent clowns. The statistic is something I like to call "Rated Effectiveness of Individual Duty" or REID. The statistic measures how many yards from scrimmage the player gains on average when they are involved in the play. Basically the average of their runs, throws, and receptions. Here is the data:

Reid is the clear winner in REID, with Golden Tate coming in a close second. I know what you are thinking, but I'm trying not to be a homer here. In fact, I set out to write this post to convince Coug Nation that Reid Forrest is not a viable Heisman candidate. After looking at the information available, I realized it would be impossible to argue that point.

Some may scoff at Forrest's REID number. "SMALL SAMPLE SIZE," they will shout. It's no use arguing with these people. They are so backwards in their thinking that debating with them will only drive them further from reality. The statistics I have tabulated above are flawless. That fact isn't made any less true because some guy left his caps lock on while typing.

Even with all this concrete evidence backing up Reid Forrest's Heisman resume, we must realize that the voters are not convinced on statistics alone. Each winner needs that special game-changing moment. Eric Crouch stumbling on a long touchdown run, Reggie Bush with an unbelievable move against Fresno State, and Ron Dayne eating 42 hot dogs in one sitting. These moments are the stuff of legend.

Reid Forrest has that moment. In WSU's lone victory, this play was so vital to the outcome, it can easily be argued that without Reid's help, victory would have been impossible. I am talking about his expert work as the holder on Nico Grasu's game winner in OT versus SMU. Without the precise spot, the laces out, the complete disregard for that natural instinct to flinch, that play would have never happened and Coug fans would be suffering through a horrific 0-fer season.

In some years, there is much debate over who should win the Heisman trophy. This is not one of those years. Washington State Punter/Holder/Running Back, Reid Forrest, has blown away all competition. His numbers are perfect and his awesomeness is outmatched. He is without peer among College Football players.