Remember when playing Notre Dame used to be a big deal?

Share All sharing options for: Remember when playing Notre Dame used to be a big deal? 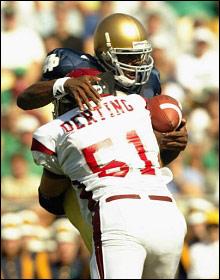 I cannot remember less buzz surrounding a game that used to be so enormous even just a short time ago.

Maybe it's just me, but I have had a considerably difficult time getting myself fired up to write a bunch about this game. I tried to do our weekly opponent podcast interview with our Notre Dame SBN counterpart (Rakes of Mallow), but he never responded to my e-mail. When we played the Ducks, I spent two days tracking down a third option to interview. I didn't even bother with a backup plan on this one.

I think back to that game that the Cougs lost in overtime in South Bend, and it was an absolutely huge deal. Maybe that's because we were in the thick of our crazy run of success -- which would land us in the Holiday Bowl against Texas that year -- but it also was that it was FREAKING NOTRE DAME. The Golden Dome. Touchdown Jesus. NBC national television. The whole shebang.

Now? Not so much. There's probably two things at work here.

First, we all are pretty much convinced we're going to get killed just about every week, so that naturally takes the interest down a notch no matter who we're playing. I mean we'd like to write a post every week covering the keys to victory, but who are we kidding?

Second, let's be real -- Notre Dame just ain't what it used to be. Outside of a blip here or there, it's been a long time since Notre Dame has been a national power. The last time Notre Dame won a national championship was 1988; teams who have won all or part of multiple championships since then include Miami (3), Nebraska (3), Florida (3), Florida State (2), USC (2), and LSU (2). Additionally, when was the last time you saw a "national power" lose nine consecutive bowl games?

I guess I'm not really trying to make much of a point, other than to say it seems weird to me that we're playing Notre Dame and it just doesn't seem to be that big of a deal. About the only thing that seemed to fire up the fan base this week was Charlie Weis intimating that the Irish were going to beat the Cougars badly. (As if that's some kind of profoundly inaccurate pronouncement.)

Maybe I'm off base. But I don't think so.

At any rate, if you are sad that we didn't actually conduct an interview with a Notre Dame writer this week, I'll direct you to two Q&A posts over at WSU Football Blog -- one with NBC Sports Notre Dame blogger Keith Arnold and the other with Irish blogger Subway Domer. Both are good reads and will give you some inside information on the Irish.