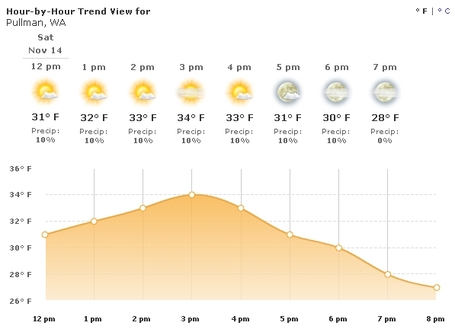 "I don't like that place. It is the worst trip. There is nothing there. It is 1 ½ hours from the airport. It's cold and even the hotel is bad. Everything is rough out there, man. You have to be a strong person to go there. Hopefully we'll go there, get the victory and run home as fast as we can."

Game coverage from around SBN: Here

Radio: Find your local station here. You can also listen to it via streaming for a fee at wsucougars.com.

The line: UCLA minus-17.5 (Fun fact! The Cougs have covered in five of their past six games.)

When the Cougs have the ball ...

Keys to the Game Competing

1. Get serviceable line play. This will likely determine if there's any kind of a chance of upsetting the Bruins today. On offense, how we contend with Price will go miles toward determining whether we're able to do anything at all with the ball in our hands. Alfred obviously won't be able to handle him by himself -- nobody has -- so it'll be up to the line to work together to try and keep him out of the backfield as much as possible. If there's one thing we know about Lobbestael's inconsistency, it's that he's a heck of a lot better when he's not thinking about who's around his feet.

Defensively, there's a good chance this is the worst the offensive line we've faced in some time. They're about as young as we are, so there remains the possibility that we can do some things up front. Of course, "doing some things" is relative, but ... well ... you know. If they can at least occupy some blockers up front, I like the chances of our linebackers to make some plays.

2. Be physical. When a team comes from sunny California to sub-freezing Pullman, the absolute best thing you can do is hit them. Repeatedly. Nobody likes to get hit when it's cold, but it's a lot better when you're the one doing the hitting. If we can make the Bruins hate Pullman even more than they already do after feeling the sting of a cold hit, an upset could be in the making.

2. Dig into the bag of tricks. In our discussion about the coaching staff this week, we noted what has appeared to be a lack of creativity. This is a week when the coaches should be pulling out all the stops. Halfback pass? Reverse? WR pass? Fly sweeps? Let's see what's in there, because the longer we hang around in this one, the greater the chance the Bruins fold in the cold.