Aden finally sends in his LOI

Share All sharing options for: Aden finally sends in his LOI 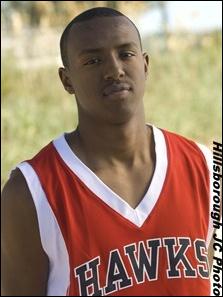 Some of you might have been beginning to wonder what was going on with basketball recruit Faisel Aden -- I know I was. Well, any thoughts that maybe he was having a change of heart were put to rest yesterday when WSU finally received his letter of intent.

This is a recruiting "class" that was supposed to lack a lot of drama; only one player from the current squad is graduating (Nikola Koprivica) and Patrick Simon, who faxed in his LOI a week ago, has been committed for quite a while.

However, with new coach Ken Bone coming in and making it clear that this roster doesn't necessarily contain the skill set he needs to be successful with his system, things have been opened up again. First, there was Reggie Moore, whom Bone snatched up after Nick Witherill's transfer. Now, there's Aden, who committed about a week and a half ago. Only thing is, there's no scholarship readily available for Aden.

So, why go to all the trouble for this guy?

Truly, there's very little out there on Aden. He's reportedly a 6-foot-4 combo guard, and he's out of Hillsboro Community College in Florida. As a JC guy, he's not rated by any of the scouting services. He averaged 20.4 points while shooting at an average clip from behind the arc (about 35 percent), and presumably will have three years to play two. In the athletic department's news release,  Bone said he's averaging above 30 points this season.

"We're excited about signing Faisal to a letter of intent," Bone said. "He's a 6-4 guard that can really shoot the ball from the perimeter...really good scorer, not just a shooter. He's putting up big numbers right now (at Hillsborough Community College), he's averaging about 30 points per game after like five games. He's the type of guy that could come in and help us next year, whether he would play immediately next year or not, that's for down the road, we'll see what happens."

Probably the most intersting thing about Aden at this point is his story. He's from Somalia, immigrating to San Diego when he was 7 years old. If you know anything about Somalia, you know it's not exactly a bastion of peace.

"It was starting to get really bad by the time we left," Aden said. "If we would have stayed a week or so, it'd probably been deadly. There was no police. No government. You could get shot."

He eventually moved in with his sister in Texas for high school in an effort to escape yet another bad situation in the San Diego projects. He attended a private school called God's Academy, lighting it up there before heading off to New Mexico State, where he was recruited by then-coach Reggie Theus.

Only, there was a catch. God's Academy had only been around for a few years, and the NCAA Clearinghouse elected not to accept his high school transcript. So, he headed off to Florida, where he became a dominant junior college scorer in his freshman year. He reportedly also had offers from Oklahoma State, Fresno State and Utah State, and was drawing interest from others.

How does he fit in with a team that's already guard heavy? Honestly, I have no clue. A lot will probably depend on whether all the guards stick around. But what little information is out there on him suggests that he fits the mold of the kind of player Bone covets -- one who can run and shoot.

Additionally, Aden professes to have deep love for the game, something that would be music to the ears of a guy like Bone, who is the ultimate gym rat of a coach:

"I've always wanted to do great things in basketball and always had the confidence that I would do it," Aden said. "I just had the passion for it, and it never dies."

I will say this with a pretty high degree of certainty: He's got to be pretty good, because he's not only going to take someone's scholarship -- he's also going to be in the same class with Klay Thompson, DeAngelo Casto, Marcus Capers, Mike Harthun and Abe Lodwick. I suppose he could redshirt, but that rarely makes sense with junior college guys in basketball. Unlike football, it's not like they need to physically mature or learn a complicated system. So, my inference is that Bone recruited him to have an immediate impact next season.

As for the scholarship situation, I'm presuming that Charlie Enquist goes back to walk-on status. However, word on the street is that Bone isn't done with this class, and I'd be surprised if he doesn't make another play for an athletic big man in the late signing period. However, your guess is as good as mine how that scholarship is freed up. We could speculate all day on how that might happen, but at this point it's probably best to just take a wait-and-see approach.