Share All sharing options for: Two reasons why people who blame the coaches for this entire mess are at the very least misguided

The coaches have taken a lot of heat for the past almost two years now for what has transpired on the football field. That refrain reared its head again Saturday, after one play in particular.

Now, anyone who watches Chris Berman and Tom Jackson on Sunday afternoons knows that you do one thing, and one thing only, on a Hail Mary pass. Go ahead, say it with me ... "YOU KNOCK IT DOWN!" The wonderment, of course, spread from the notion that if we all know that, how in the world did Aire Justin and Xavier Hicks Jay Matthews not know it?

If only it were that simple.

Consider the following screen shot, captured at the moment when Golden Tate caught the ball (about 1:50 on the video), which I have so deftly illustrated to make my point. 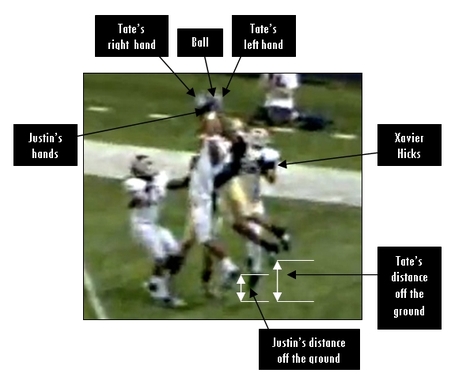 The probability that Justin and Hicks Matthews could have knocked that ball down is minute -- or even nonexistent. Yes, it appears Justin is going for the catch. But I supremely doubt the outcome would have been any different had Justin or Hicks Matthews done their darndest to just get one hand up there and knock it down. This simply looks to me like a case of one team having an exceptional athlete and another team having two guys who simply don't possess the raw physical tools to make this play.

Seriously -- look at how high Tate is off the ground. We have one athlete on our active roster who could have gotten that high and made that play. And he plays on offense. Now, if you want to criticize the coaching staff for not putting him in on that defensive play, then fine.* But that's a different conversation.

* I'm not sure I buy that you could have put Jared Karstetter in, anyway. The Irish were a medium range pass away from getting into field goal position, as they still had a timeout left. The defense had to at least entertain that notion, and have a defense in that could account for that. Besides, when you start doing things like that, you often increase the likelihood of a breakdown.

Now, let me direct you to another play before bringing this back around to my overall point.

Remember that whole blocked PAT, with Chima Nwachukwu scooping up the ball and trying to run it back the other way for two? (I tried to find video, but alas, no luck.) Our 5-foot-11, 201-pound starting safety -- who started running with the ball while no one else was paying attention, and ostensibly had anywhere between a five- and 15-yard head start on the other team -- got tracked down by this guy:

And if he hadn't caught him, he was about to get caught by this guy:

This sort of thing happened over and over again throughout the game. The defensive line getting shoved around by opponents that outweighed them across the board. The offensive line flailing away at blitzers. Alex Hoffman-Ellis and Mike Ledgerwood squaring up to tackle Robert Hughes, only to meet him at the point of attack and get driven back three yards.

Which brings me to my point. Before you start pointing the finger at the coaches -- and goodness knows, I've done it enough -- please take into consideration what they're working with. I posted this numerous times on the game thread on Saturday, but it's worth repeating if you weren't there: MEN > BOYS.

There will come a day where we're once again able to compete with Notre Dame (and USC, and Oregon, and Arizona State, and ...). But as these two plays showed, we're not even in the same ballpark with these guys yet. Yeah, we can complain about scheme, and some of those points are certainly valid. However, that the coaches have been able to squeeze as much improvement out of these guys as they have this year -- facing such overwhelming physical odds -- says something.

We're heading in the right direction. It might not be as fast as you want, and you can argue that it might be a bit faster with another coaching staff. But there isn't a coach on earth that would have beat Notre Dame -- or most of the other teams on our schedule -- with what our coaching staff has to work with.