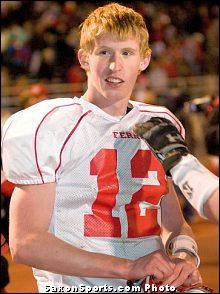 Many of you have already heard about Cougar recruit Connor Halliday's big performance in the regional crossover portion of the Washington state playoffs on Friday night to lead Ferris to a victory over previously unbeaten Wenatchee at the Apple Bowl. It led Panthers' coach Scott Devereaux to gush, "He’s the real deal. I’ve been coaching here for 15 years, and he’s the best quarterback I’ve seen. He reminds me a lot of Drew Bledsoe when he was at Walla Walla in the 80s. He’s a stud."

Of course, that makes us smile at a time when we need something to smile about.

I decided to dial up a friend who teaches at Wenatchee and has seen a lot of high school football, and asked him for his first-person scouting report. Here you go. It's fantastic.

Connor Halliday, a Washington State recruit with the Ferris Saxons, showed the Apple Bowl spectators in Wenatchee why he is a coveted quarterback. He went 22 of 39 for 259 yards, no picks, and three touchdowns and had one touchdown dropped. He also had a few timely runs for first downs in the 21-10 victory over the Wenatchee Panthers.

Halliday impressed me even before the game began. He threw 30- to 40-yard warm-up passes, seemingly with little effort, and then he performed a throw-on-the-run drill with relative ease as well. I looked at my friend and said, "he's the best quarterback I've seen all season."

He's a 6-foot-4 inch slim kid with quick feet and some elusive agility. He'll need to work on his footwork more and put on some more muscle when he arrives in Pullman, but he was able to move around behind his line and find open receivers all evening long.

Wenatchee's defense blitzed repeatedly and Halliday side-stepped one speedy linebacker after another. At one point Halliday side-stepped Lucas Sealby, a lightning quick pass rusher who has terrorized throwers this year, and set his feet to throw in one fluid motion. This was made all the simpler since he kept the ball in a ready position the entire time.

Halliday took a couple shots when his line broke down, but he maintained his poise and did not shy away from completing a pass or stepping up in the pocket to make a throw. He didn't run often, but when he did he picked up five to 15 yards each time, even though his stat sheet won't show this since sacks are deducted from his rushing yards.

Also, Halliday did not rely on one receiver. He regularly checked off from one option to another scanning the field for anyone who could gain yards for the Saxons. So many high school quarterbacks lock onto a single target without thinking to scan the field or check down, but Halliday threw the ball to receivers all over the field. This gave the defense fits all night.

His favorite target, Jason Bates, was open early, but Halliday was forced to find others as Bates suffered through double teams the rest of the game. Halliday completed passes to six players, and two others dropped balls he placed in their hands.

What impressed me the most about Halliday, though, was his ability to place the ball where defenders couldn't get their hands on it. On the side line out routes, the ball was away from the DB and near the side line allowing only his receiver to catch it. He hit the slant with ease, and hit his backs out of the backfield in stride (and put the ball over the correct shoulder for the backs too).

His first two touchdown throws toward the corner of the end zone were well out of reach of the defender but easy catches for Bates. Plain and simple, he made the receivers' jobs easy.

I'm not sure the comparisons to Walla Walla's Drew Bledsoe are warranted quite yet, but he's a talent that I'll be sure to follow over the next few years in the Palouse.