The Coverage: No TV today. Find your local radio station here. Live streaming audio is also available for a fee at wsucougars.com. If you don't mind listening to the Air Force announcers, you can find their stream for free at goairforcefalcons.com. 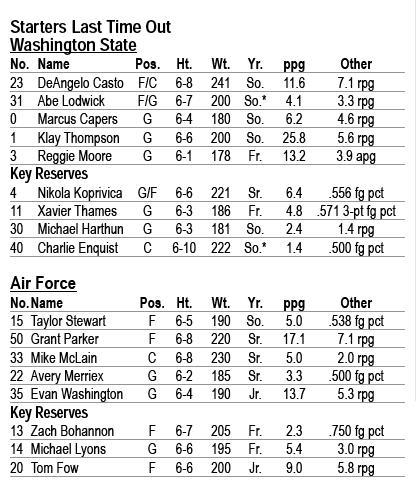 Grant Parker, Air Force: The 6-8 senior could give the Cougs fits down low. He is posting an excellent 22.4 DR%. He also can stretch the defense, as he is shooting 40% from three so far this year.

Evan Washington, Air Force: The 6'4" guard plays almost entirely inside the arc on offense. He is excellent at drawing fouls and getting to the line, posting a 102.4 free throw rate.

The Air Force Bench: Air Force has eleven guys posting minute percentages over 20%. How are they able to do that? They have 21 guys listed on the official roster. How is that possible? Service academies are exempt from scholarship limits because nobody pays any money to go there!

The Cougars win if...They use their athleticism to overwhelm Air Force and they get Klay going on the offensive end. I know that sounds redundant, but as Klay goes, this team goes.

Air Force wins if...The slow pace frustrates the Cougs and exposes their weakness in the half court.