The Place: KeyArena in Seattle, WA 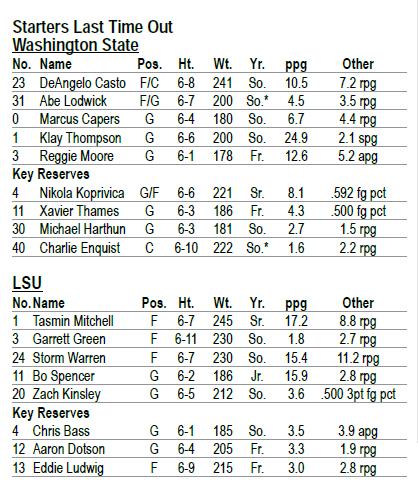 DeAngelo Casto, WSU: Dee has performed well this year despite having very little help down low on the defensive end. This game will test his rebounding prowess, as he will face one of the best offensive rebounders in the country. If Casto can limit second chances for the Tigers, he would eliminate on the most important parts of LSU's offense.

Bo Spencer, LSU: The Tigers' best player missed some key games to start the year. He takes the most shots and is the team's leading distributor. Bo hasn't shot as well from beyond the arc as he did last season, but he has the ability to knock the deep ones down. He could get hot and carry LSU to a win.

James Watson, WSU: Looks like Watson has finally risen above Charlie Enquist in the depth chart. This is a good thing heading into LSU, since James has the athletic ability to match LSU's forwards. Charlie would have a tough time keeping up with these guys. In limited action, James has put up some impressive numbers. We should expect some regression as playing time increases, but he already looks to have the ability to help the Cougs in this game and the rest of the year.

Storm Warren, LSU: Nuss and I raved about this guy on last week's podcast. At that time, his offensive rebounding percentage sat at a ridiculous 24.1%. That means he was gathering one out of every four of his team's misses. After a poor performance in his last game (incidentally, a game LSU barely won over Rice) he has dropped to a still ridiculous 18.4%. If Storm is able to hit the offensive glass, something that the Cougs have been poor at preventing, he could be a game changer.

The Cougars win if...they control the glass, take care of the ball, and hit their threes. LSU has been poor at forcing turnovers and are not very good at defending the three point shot. The Cougs need to exploit these weaknesses.

The Tigers win if...they dominate offensive rebounding and Bo Spencer returns to last year's form. As I already mentioned, LSU excels at getting second shots and Bo Spencer has the ability to light us up from the outside.