Radio: Find your local station here. You can also listen to it via streaming for a fee at wsucougars.com. 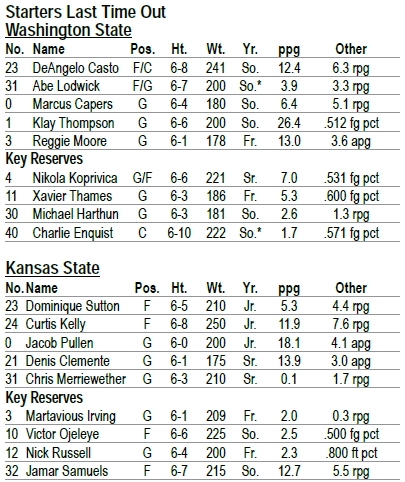 Klay Thompson, WSU -- What, you expected someone else? The Wildcats don't have the same kind of length on the perimeter that Gonzaga did, so Klay should find the looks at the basket to be substantially less difficult. However, the Wildcats don't lack for athleticism, so Klay will still have his hands full, especially getting to the rim. Look for Bone and the Cougs to make a more concerted effort tonight to get the ball in his hands in spots where he can score.

Curtis Kelly, KSU -- The UConn transfer is probably the Wildcats' most talented player, but he (and touted freshman Wally Judge) was recently called out by coach Frank Martin, who took over for Bob Huggins when he bolted for West Virginia:

"Playing is not a right — it's a privilege," Martin said. "If you do your job and you're responsible and you're a good teammate, you play. If you don't, you don't play. They don't have a right to play. Maybe there's somewhere else that can give them the right to play. If they can find another school that gives them that opportunity, then they need to go play there."

It's easy to bench a guy against Fort Hays state, because you know you'll win, even if it's not as impressive as it should be. Will Kelly respond, or will we see if Martin has the guts to bench him against a tougher opponent?

Reggie Moore, WSU -- The freshman guard is hardly playing like it. He got the rim almost at will against Gonzaga and was great on Demitri Goodson, but Denis Clemente presents a whole 'nother challenge. If Moore is on his game both offensively and defensively, he'll be a difference maker for the Cougs.

Wally Judge, KSU -- The McDonalds All-American played just five minutes against Fort Hays state. Will Martin turn the 6-foot-9 freak of an athlete loose against the Cougars' undersized front line? The talent is still in there somewhere ...

The Cougars win if ... they are aggressive driving to the basket and crash the offensive boards. KSU is positively putrid at keeping players off the line and the glass -- ranked 240th and 260th, respectively, in free throw rate allowed and defensive rebounding percentage -- and if the Cougs can do that, their offensive efficiency will be up around 120 and they'll likely win even if the defense takes a step back.

The Wildcats win if ... the Cougs settle for a lot of jumpers and short circuit themselves on offense. Look: K-State is going to get theirs offensively. This is a better offensive team than Gonzaga, so if the Wildcats do a good job defensively (or if the Cougs take themselves out of it), KSU likely wins it.