Radio: Find your local station here. Or streaming online for a fee at wsucougars.com. 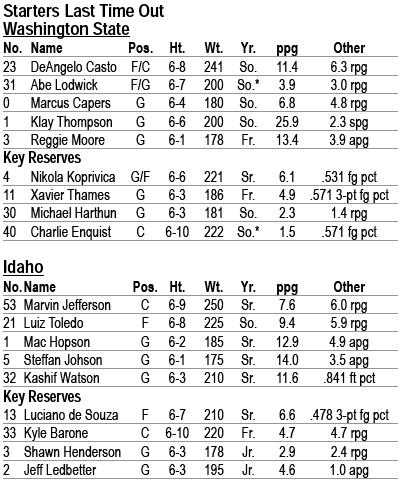 Klay Thompson, WSU: Starting to sound a little redundant, but as Klay goes, the Cougs go. Can he bounce back from a couple below average performances?

Steffan Johnson, Idaho: Johnson transferred from Pacific, where he played over 30 minutes a game and averaged over 14 points per game two years ago. He has quickly asserted himself as Idaho's best offensive threat.

DeAngelo Casto, WSU: Can Casto dominate the inside against players that he should be able to overmatch physically? Casto's defensive rebounding percentage has left something to be desired so far this season, sitting at just over 15%. The Cougs need Dee to assert himself on the defensive glass and end possessions for the other team, because we know there are not many other guys on the front line who are capable of doing so.

Mac Hopson, Idaho: The former Coug has made a nice transition to the U of I. He is shooting well and distributing the ball well so far this season. Look for him to play with a little extra fire against his former school.

The Cougars win if... they defend the three point shot better than they have all year, dominate the glass, and eliminate stupid turnovers.

The Vandals win if... they continue their hot shooting from the outside and take advantage of the Cougs lackluster three point defense, and Klay is unable to do the same on the other end.