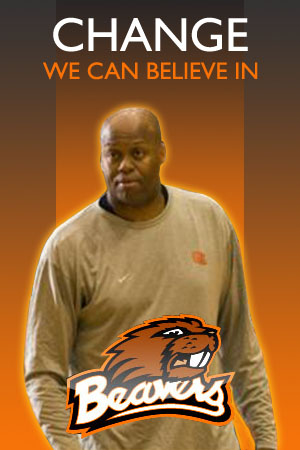 Before the start of the season, I thought the biggest question mark facing the Oregon State Beavers was: could they become the first team to lose every Pac-10 game in two straight seasons?

Boy, was I wrong. Me, and everyone else that follows Pac-10 basketball.

If Oregon State defeats us today, they will get their fifth Pac-10 victory and move into a tie for seventh place in the conference with us. The Fightin' Beavs were 4-5 at the Pac-10 turn and have a four game lead over their in-state rival, Oregon.

Where did they go right?

Some Pac-10 analysts will come at you with a bunch of garbage that OSU's improved play is due to a "stifling new zone defense". Don't believe them. What they are looking at is points per game, which, as you well-informed members of CougCenter know, is crap. OSU allows a 52.6 eFG% on defense, good for 310th in the nation. The only thing Oregon does statistically well on D is keep their opponents off the free throw line. Outside of that, they are simply mediocre in forcing turnovers and horrible at consistently earning stops. You'd think zone principles would lead to better 2-point field goal defense, but it doesn't. OSU ranks 322nd in that category.

Craig Robinson has done the best possible thing he could this season. Which is, get mentions for his coaching, and not just the fact he's Barack Obama's brother-in-law. Before the season, it seemed the only real interest surrounding OSU had to do with that little tidbit of information. And yes, it's interesting. But for those of us that follow this conference closely, well, we knew it was going to be storyline overload by year's end. That's why it's nice to hear about Robinson doing the good job he's done. He's turned a modestly-talented Oregon State team into the surprise of the conference. Under his guidance, OSU has become one of the better teams in the country in shooting and forcing turnovers. And he's getting a bunch of players that weren't his recruits to believe in his system. That's downright Bennettesque.

And how about that whole shooting thing? Right now Oregon State is 69th in the nation in eFG% at 52.1. They are decent on three-pointers, making 33.8%, but excellent inside the arc, connecting on 52.9%. That's good news for us, because Bennett's defensive system thrives on trying to take away anything on the inside. And it's been downright shocking for the other teams in the conference that thought OSU would be the same old pushover from last year. Clearly Robinson's Princeton-style offense is starting to catch a little bit of fire in Corvallis.

Still, OSU is far from a juggernaut. Why did we struggle so much against them on the road? Four factors please:

Turnovers turnovers turnovers. As I mentioned, OSU has become very good at forcing them, but we can't fall into that trap tonight. We also gave OSU a slight edge in offensive rebounding, but I felt that was more of an aberration the last time around. Tonight I believe Baynes, Forrest, Casto and Harmeling will have a better performance on the boards.

We won that last game by way of shooting well and getting to the line. It was a rather stunning offensive performance for a game that needed 45 minutes just to reach 61-57. That's what slow-down basketball does. The media will hype tonight's game up as a "defensive battle", when in reality it's actually two good offenses that just happen to play at a slow tempo. Let's hope ours is better.

One key remains for tonight: free throw shooting. Oregon State is an absolute joke in this category, shooting 62.1%. The Cougars shoot 76.9% - seventh best in the nation.

So, if all else fails, Tony, put the Beavs on the line. They are not good there. We are.

And please don't lose this game.