The shocking rise and fall of Daven Harmeling

Share All sharing options for: The shocking rise and fall of Daven Harmeling 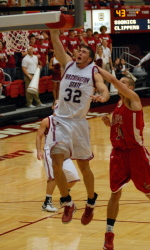 Without a doubt, one of the more surprising storylines of the 2008-09 season has been the disappearance of Daven Harmeling on offense. It is assumed, logically, that players get better as the years go by in college basketball. They start out with some "freshman mistakes", start to get the hang of it as a sophomore, break out as a junior, and shine as a Senior. The most common exceptions to this are the guys like Klay Thompson, who come out blazing as freshmen and never really look back.

But a player regressing as time goes by? That just doesn't make sense. Let's look at how we got to this point with Daven Harmeling.

2004-05: Daven enters WSU as part of the Low/Weaver/Cowgill class that changes everything. He is relatively ineffective as a freshmen, connecting on only 24.1% of his three-pointers and posting an offensive rating of 86.6.

2005-06: Daven dislocates his shoulder in the first game of the season, a blowout win over UC Riverside. Harmeling spends the rest of the year in a sling, relegated to shooting one-handed three-pointers in warmups, and earning his medical redshirt.

December 5, 2006: Daven has his breakout game at the exact same time the Cougars as a team do: The 77-67 upset of Gonzaga. Daven connects on 4 of 9 from beyond the arc and finishes with 20 points.

January 4, 2007: Daven helps the Cougars to another upset win over a ranked team, this time notching a career high 28 points against Arizona. This time, he hits 7 of 11 from distance. The Cougs establish themselves on the national scene.

February 10, 2007: Daven goes off for 26 against California. This time he's five of seven from three-point land.

January 10, 2008: Daven leads the Cougars to a critical road win over USC, with 19 points and a shot that couldn't miss in the first half.

However, this was also the beginning of the end for offensive Daven. He only managed double figures in 2 of the Cougars' 18 remaining regular season games, and saw his minutes start to disappear. Derrick Low emerges as the team's #1 option on offense, and Kyle Weaver starts hitting career highs in 3-point percentage.

2008-09: Daven starts the year off right,  even scoring in double figures in a stretch of 5 out of 8 Cougar nonconference games. Still, he never scores more than 14, and disappears once Pac-10 play begins. Currently, he is 7 for 40 (17.5%)  from behind the arc in conference play.

We can see Harmeling's struggles graphically, as well. Let's look at his points average, offensive rating, and 3-point shooting percentage over his career:

We can definitely see the regression, but looking at the chart it is more of a statistical flatline from his breakout sophomore year to his senior season. Maybe Daven just isn't the player we thought, or at least hoped he was when he lit up Gonzaga and Arizona. Maybe the consistency isn't there like we wanted it to be.

I don't want it to end this way. Please, Daven, make everything you can in these last few games. This team still needs your help.