Share All sharing options for: OK, Patty Mills really is that awesome

I know you're probably itching to move past last night and look forward to next season, but we've got about eight months in front of us to do that. For now, I think we all need to appreciate what we witnessed last night.

The best guard the Cougs have played against all season. 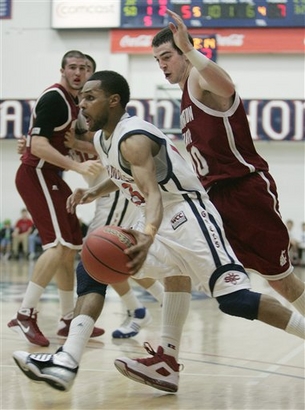 Tony Bennett said on the pregame show last night that he hoped all the tough guards the Cougs faced in Pac-10 play had prepared WSU for Patty Mills. It turns out, nothing could have prepared the Cougs for him, because we haven't seen anyone that good all year long.

Taylor Rochestie has been absolutely superlative at keeping opposing guards in front of him -- and that includes guys like Darren Collison and Jerome Randle -- and Mills made him look absolutely foolish last night. Mills is both quick and fast, a deadly combination. He's not a consistent shooter yet, but when he's feeling it the way he was last night, his unbelievably quick release is impossible to defend.

Another thing that impressed me about Mills was his leadership. He set the tone from the opening tip, refusing to let his team pout. I know we wish our team would have done a lot of things better, but Patty Mills led his team to this victory. Every time we'd start to claw back in it, he'd do something to put us back down by eight to 12 points. This is the kind of guy you build a team around.

Now I know what all the fuss is about. It's not just that he piled up 27 points last night; it's the way he did it. When you singlehandedly shred the Cougar defense the way he did last night, you've really done something -- only one other guard this year came close to doing what Mills did last night.

NBA scouts should rightly be drooling about this kid. I'm honestly excited to watch him and St. Mary's get as deep as they can in the NIT, because these are, without a doubt, his final college games. (Which St. Mary's knows, and is probably why the Gaels were so pissed about missing the Tournament.) Now that he's not destroying my favorite team, I can fully appreciate his awesomeness.

Good luck in the NBA, kid -- and I'm glad I'll never see you on the floor against the Cougs again.