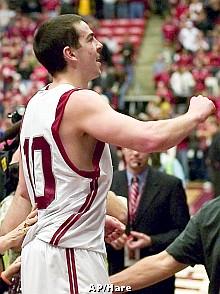 In the upcoming weeks, we'll have plenty of time (and posts) dedicated to researching and prognosticating next year's Cougar basketball team.

For now, let's look back on a season defined just as much by the what-ifs as the actual accomplishments. Let's not focus on the question marks or the letdowns at the moment (although we will mention one particular meltdown in this post). Nope, let's look back at some of the wonderful people that made the 2008-09 Cougar team what it was.

In some ways, this group of players overachieved, one season removed from the Low-Weaver-Cowgill Sweet Sixteen squad. On the other hand, they were a stone's throw away from the NCAA tournament bubble, and certainly capable of flashes of greatness. I prefer to look at the glass half full. And the glass was full of exceptional senior performances and breakout seasons from the freshmen.

One thing we can all agree on: this team will not be the same without its seniors. It will be hard to watch the tip-off without the steady hand of Aron Baynes going for the ball. We're not going to see Caleb Forrest dive on the floor at a loose ball. We're not going to see Daven Harmeling come off the bench to rain a three or two. And we're going to have to play 40 minutes without the calm leadership of Taylor Rochestie. It's all gone now, so all we can do is look back and enjoy it.

So, without further ado, the 2009 CougCenter Postseason Awards:

Player of the Year - Taylor Rochestie

Taylor Rochestie was this basketball team. You could rename this award "most valuable player", because this team rose and fell with Taylor Rochestie. It wasn't all sunshines and daisies for Taylor in '09. He started the year out with his same old stat-sheet goodness, dominating teams by passing and scoring. And then, the slump. Taylor was turning over the ball. Taking too many shots. Forcing his offense. Come January, we knew Taylor had to respond to being the main man, or fade away into obscurity. Along with our team.

And boy did he ever respond. Taylor lifted the Cougars to a one point lead over Stanford to keep the Cougs from starting 0-3 in conference. He went on to have the game of his career (33 in the upset win at UCLA) and the shot of his career (ASU) within one week's time. Rochestie proved he could, in fact, take over the game with his scoring and not just his passing. Perhaps no player was as indispensible to his team. Taylor was on the floor for an astonishing 91.1% of the Cougars' minutes on the floor. That's the 22nd most of any player in the nation, and this includes the numerous blowouts the Cougars enjoyed to start the season. In conference play, no player was consistently on the floor as much as Taylor.

You could make a strong case for Aron Baynes and Klay Thompson, but this was Taylor's team. His 30.0 assist rate was in the Top 100 nationally and he played great defense consistently without fouling (1.9 fouls created per 40 minutes). Rochestie took on some of the best guards in the Pac-10: Tajuan Porter, Derek Glasser, Darren Collison, among others, and held his own.

But we won't remember Taylor for his defense. We'll remember him for being the clutch-shooting kid out of Tulane that transferred to Washington State and became the face of Bennett Ball in his four years at Wazzu. Remember those five pillars Tony talks about? Passion, unity, humility, servanthood, and thankfulness. Perhaps no one exemplifies them the way Taylor Rochestie did. He was willing to give up his time, his effort and his scholarship for Washington State. Thanks to two of those three (he got his scholarship back in the end), he will leave WSU a legend.

Not much need for an explanation here, but if you're into per game statistics, he led the way with 13.2 points per game. And the 4.5 assists a game weren't bad, either.

Again, how does this man miss out on the Pac-10's postseason awards? Baynes was dominating under the basket on both ends, but we'll miss his defense every bit as much as the hook shot. Since the Pac-10 coaches loved Jon Brockman so much, let's consider the following: Baynes had a 5.5 block% this year. J-Brock? Try 0.3%. Brockman, for all his rebounding "dominance" had a 24.6 defensive rebounding percentage, good for 25th nationally. Baynes, and remember this accounts for the slower WSU tempo, notched 23.6. Hmm - not so far apart after all, eh?

(Side note: DeAngelo Casto notched a 9.1 block%. The national leader was Jarvis Varnado at 15.4)

Fortunately, we have an heir to the defensive throne underneath the basket in DeAngelo Casto. Nevertheless, we'll no longer get to see the glorious Baynes/Casto combination on the court, and we're going to be without a big defensive presence in the low post for some time to come. Baynes' athleticism and his ability have improved dramatically in the past four years, more than any other Cougar. He deserves to be honored for that.

He should also be recognized for his offense - with a team best 114.1 offensive rating and 100% 3-point shooting percentage. But we can't give Aron all the awards.

Newcomer of the Year - Klay Thompson

The most obvious award in the history of meaningless sports blog-awarded awards.

But just in case you lived in a nuclear shelter for the past year, Klay played for 81.8% of the Cougs' available minutes, had a 51.8 eFG% (not bad for someone who rarely shoots from the paint) and a 41.9% 3pt shooting percentage. He also led the team in free throw shooting at 89.7%. If he can put on a little more weight, and start to get to the free throw line, watch out. This kid is special.

This award goes to a player that may not have been a star this year, but has the potential to become one in the future. That man is Marcus Capers, a defensive dynamo who started to find his jump shot against St. Mary's. Fans of this site will know I've done this before, but let's compare two unidentified players:

Player A is a better assist to turnover man, while Player B is slightly better at getting the ball int he bucket. Player A, of course, is Marcus Capers, and Player B is a freshman named Kyle Weaver. Both showed early signs of greatness on D. To think that we may have the second coming of Kyle on the way is too exciting to fathom. Of course Capers has to learn to the be the offensive player Weaver was. If he can, we may have found a serious diamond in the rough. Of course, can you really doubt Tony's scouting abilities at this point?

I gave this award out in all my post-game summaries, and for the season as a whole I really believe this belongs to Forrest.

Consider this: Aron Baynes led the team with a 114.1 offensive rating, good for 219th in the nation. Who was number two? Caleb Forrest, with 112.1, good for 312th nationally. That's even more impressive when you look at Taylor (105.5) and Klay's (98.0) ratings. And you know those pesky turnovers that caught up to us so often? Caleb was the 68th best in the entire nation at avoiding them - posting a TO Rate of 11.4. Throw in a 2.6 block% and an endless number of hustle plays, and you have a solid player without a lot of the spotlight.

Sure, he was a fun favorite, but how often did you hear the media applaud Caleb Forrest for things other than his grit and hustle?

Also, as your co-blogger Dancing Football reminded me, it was Caleb who denied Jeff Pendergraph to set up "The Shot".

Also considered: Klay Thompson (in the shadow of Taylor and Aron despite his critical importance to the team)

If this was over the past four years, I'd give it to Aron Baynes, who could hardly catch a ball in his freshman season. But since this award mainly looks at this year (from last year), Caleb's the man again. You have to consider that Caleb, who averaged 3.4 points last season, had nine games in double figures this year. He set a career high in rebounds, and after never posting a positive assist-to-turnover ratio in his first three seasons, notched a 1.41 this season. Yep - that's improvement.

Also, I'm going to miss all the paper cut-out trees in the student section.

Another fairly easy decision. Made the Pac-10 all-freshman team along with Klay Thompson, and brought positive contributions on both ends of the floor. His only downside is the turnover issues, but it was clear that Casto improved in both that department, and free throw shooting, as the season wore on. Next year he is going to be key. For now, we can enjoy the fact that he came off the bench for that ridiculous 9.1 block%, a 99.0 offensive rating, and a team-best 61.3 FT rate. And I love me some free throw rate. And for all the talk about turnovers, Marcus Capers was actually more prone to giving the ball away (of course Marcus also made up for it with a much larger number of assists).

Did I mention he's a heck of a lot of fun to watch?

Get excited, folks. Casto is the real deal.

Most disappointing loss - vs. Oregon State. The second half of this game was some of the most painful, disappointing basketball you will ever see. Let's just move on.

Biggest win - at UCLA, but just barely. Remember this was only the second time WSU has beaten the Bruins at Pauley, and they did it in a completely unconventional way for a Cougar team. Outscoring someone. The crazy thing, and I mentioned this after the game, is that the game only had 65 possessions. We average just under 59 a game. The game was deceptive, looking like a run-and-gun shootout on TV. But in reality it wasn't. This is just how freaking good Bennett Ball can be on offense. When it's done right. And nobody did it better than Taylor Rochestie, with his career-high 33 points and a dagger to seal it in the final minutes.

Also considered: Arizona State (in Pullman). If we were going for biggest moment, this is the clear winner. But the UCLA game infused some hope back into what was thought to be a lost season. And Arizona State and UCLA will probably finish the season ranked fairly close together. Slight edge to UCLA on the road.