Is March Madness now a myth?

Share All sharing options for: Is March Madness now a myth?

A thought hit me yesterday as I was watching the end of the second round of the NCAA Tournament. Consider the following:

You'll notice that three of the past four Sweet 16s have been very top heavy which, on its face, seems to go counter to the NCAA Tournament's reputation for being March Madness. (The notable exception, of course, was last year.)

I thought that seemed a little odd, and wondered if the "madness" was more anecdotal perception than reality. So, I decided to go back and look at the last 10 tournaments, adding up the seeds of all of the teams to make the Sweet 16. I also decided to add up just the top three seeds from each region to see if the numbers were being skewed by an outlier or two in any given region. Here is what I found: 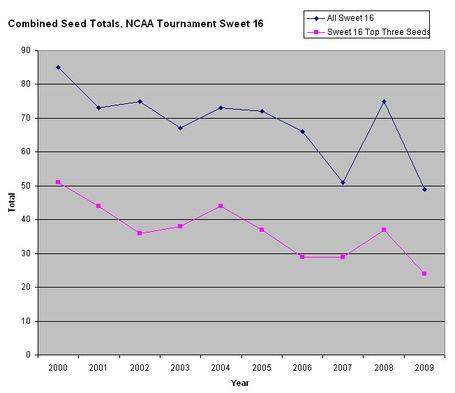 What do we learn? With the exception of last year, there's an obvious trend ... and it's not toward "madness." Forget all the talk of parity -- the tournament is progressively favoring the higher seeds advancing deep in the bracket. How about this one: Do you realize that every No. 1 seed since 2004 has made the Sweet 16? And that in that time, 70 percent of No. 2 and No. 3 seeds (14 of 20 each) have advanced to the Sweet 16? (It drops off fast after that -- just seven of 20 No. 4 seeds made it to the Sweet 16.)

While the drama is as palpable as ever -- there are still loads of great games to be had each day -- the end results are becoming more predictable. It appears at this point that there are now about eight to 12 very good teams in the tournament, and the rest are fodder. In some ways last year helps prove the point even more; despite three double-digit seeds and West Virginia making it to the Sweet 16, it was the first year all four No. 1 seeds advanced to the Final Four.

How to explain this trend? I'm not sure.

The most obvious explanation is the advent of NBA's rule prohibiting players from joining their league, but that only started in 2006. It certainly helps explain the dominance of the upper seeds the last four years, since those players that would have been going straight to the NBA were going to big time schools. Compounding the situation is that those players presumably were going to schools that already were in position to contend for a chamionship, since players figured they were only coming to campus for a year.

But this doesn't help us figure out the 10-year trend. Maybe the NCAA - gasp! -- is just getting much, much better at seeding teams. Other than that, I don't really have a viable explanation. I'm all ears if you have one.

However, this also leads us to another question: Is this upper crust dominance such a bad thing? We all like the nice stories, but we generally only like them in small doses -- once we get past the first weekend, beyond wanting to see great basketball, don't we like tuning and seeing teams, coaches and players we're familiar with?