Editor's Note: This is a followup to johnnycougar's original awesome post breaking down the freshman of the year race.

Well, now that we know that Isaiah Thomas is the Pac 10 freshman of the year by the coaches' vote, let's see how the SBNation sites voted.

I've broken it down by player and by blog.  I thought that would be a little more interesting than just having the raw totals. 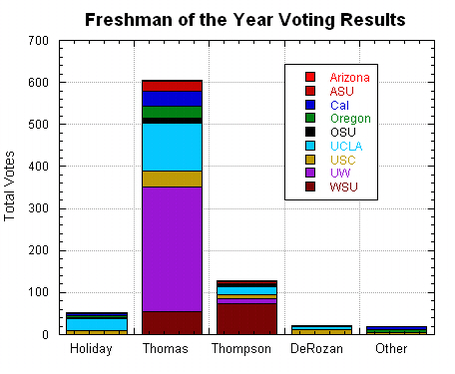 Isaiah Thomas is the clear winner, with just over 600 votes out of 828, good for 73% of the vote.  Next up is Thompson, with 15%, largely fueled by CougCenter and UW Dawg Pound.  Holiday takes 3rd with 6% of the vote, and DeRozan and "other" account for about 6% between them.

Obviously this is not a scientifically valid poll, especially given that at least one UW commentor encouraged people to follow his example and vote for Isaiah Thomas on each site.  I am sure that several Cougs did similar things in return.  It's all in fun.

One last note: I think we saw on Saturday how much more important to his team's success Thompson is than Thomas. Thomas took exactly zero free throws, shot only 3-11 for six points (at least one made shot was incredibly difficult and left my jaw dropped though), 2 rebounds, 2 assists and 1 turnover in 26 minutes. Not exactly great numbers, but UW had other players step up and win the game.  Thompson got in foul trouble and put up similar numbers to Thomas in similar minutes, but WSU got nothing going offensively outside of occasional Rochestie shots, partly because UW could afford to double team Baynes and shut down our interior. Thomas probably is the better player right now, but I think the game clearly showed how important Thompson is to the Cougs.