As it turns out, the problem with the jersey unveiling later this month in the Tri-Cities wasn't the Tri-Cities. The problem is that you can't unveil anything this day and age without someone else leaking it first.

Thank you very much, EA Sports. The Tri-Cities were being spoiled anyway.

This, ladies in gentlemen, is why the change to Nike from Russell Athletic was a very good idea: 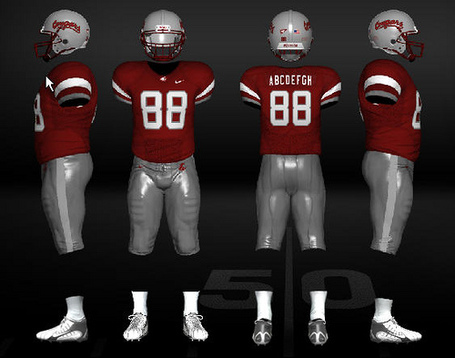 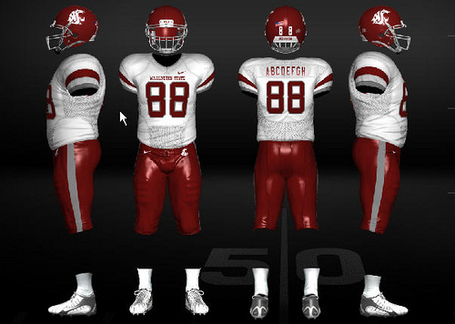 Awesome, assuming this is the real deal. A great mix of the old and new. The best part is I have never seen a Nike jersey template like this one. Sure, it may look similar to some others out there, but for the most part this is all ours. It's sleek, but it's not overkill on features. It's got some good looking modern stripes, but it keeps the traditional block numbers. Nike didn't give into their bad habit of throwing random crap on the jersey just for the sake of "innovating". We've even added gray back to the roads. This design can hold up for a long, long time.

This is as good as I could've hoped for. From a certified uniform geek.

Now, having said that, let's curb our enthusiasm a little bit.

While EA is very accurate in translating jerseys to their games, they make mistakes. A lot of mistakes. There was the year where they made us crimson-on-crimson at home even though we didn't actually go that route. They've messed up on our helmet, and failed to give us both the home and away helmets in recent years. On average I'd say they screw up one thing about WSU per year. So this may not be 100% accurate.

Also, is that a gray stripe on gray pants? Is this actually how we're going to look in a game? We won't know for sure until we see it on the field.

Next, EA's uniform editor (responsible for the leak) gives us a bunch of mix-and-match jerseys, helmets and pants. But I haven't been able to figure out which combination we'll actually use. The above pictures are only my best guess. It is possible that we have a bunch of interchanging parts that we mix and match frequently. Still, I'm in favor of gray pants and gray helmets whenever we can use them. We'll see if our equipment team agrees.

Also, Paul Wulff had told Cougfan earlier in the year that we were going back to the gray helmets with the Coug head logo. Yet they are suspiciously missing from EA Sports' database. Will we use the Coug head helmet all the time? Will there still be differing home and away helmets? Is the script helmet still going to be around? We have to wait for the Tri-Cities unveiling to find that out. So there's still some drama.

Having said all that, I love them. Especially when Bad Nike is always lurking in the shadows, with Boise State its most recent victim.

These jerseys rule. Finally, a unique but classic identity for WSU. I'm definitely shelling out the cash for a replica. Only question: who the heck is Nike going to choose for the jersey number?