Oh Mediocrity, How I Miss You So.

Share All sharing options for: Oh Mediocrity, How I Miss You So.

Historically, Cougar Football can be characterized as having peaks and valleys. In the last 15 years, we've seen them go to Rose Bowls, and we've seen 2008. Prior to 2008, even those lean years saw competitive football and upset wins. There may have been bottom of the league finishes, but coming to Pullman was never an easy out. Then came 66-3, 69-14, and 69-0. I still look at those scores and can't believe they really happened. It's tough to win that easily on an EA Sports video game.

It's easy to say that those were just losses and they count the same as 44-41. It is quite clear that they do not. Games that bad were tough to endure. 44-41 has ups and downs. 44-41 has hope. 44-41 keeps people in their seats. Last year, every game was over by halftime. Gameday Martin Stadium resembled Spring Football Martin Stadium. The saddest thing is that it really was not all that long ago that these Cougs had the talent to take advantage of another team's weaknesses and pull out big victories and keep the fans in Pullman entertained. This is evidenced by the picture below, taken just a season and a half ago on October 27th, 2007. 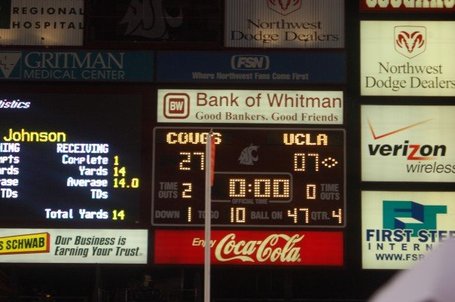 Remember this game? I sure do. Outside of Apple Cups, I don't think I've ever wanted the Cougs to win a Pac 10 game more in my life. I was enduring my student teaching at the time and my Master Teacher, Mr. Duarte, was a UCLA alum. Not only was he a UCLA alum, he let me know everyday how great UCLA is at everything.

The Cougs came into this game riding a four-game losing streak. The streak included blowout losses to USC, UA, and Oregon on the road. However, I had hope! The only home game in that stretch was a last-second loss to a very good ASU team.

The Cougs dominated UCLA. Dwight Tardy rushed for 214 yards and a small contingent of fans (including myself) decided the victory was field-rushing worthy. I had all the ammo I needed to get through the last 5 weeks of student teaching. Wazzu went on to defeat Stanford a few weeks later, and I'm sure if the Cougar faithful knew what the 2008 season held, they all would have been down on the Martin Stadium turf.

Needless to say, expectations have changed. In Grady's recent Q&A with So-Cal Sports Hub, his optimistic outlook was a 4-8 record for 2009. I agree with that completely. Every Pac 10 game this year the Cougs will be heavy underdogs. This is the first time in a long time that I'm not constantly looking over the schedule to figure out which 6 or 7 games the team can win to make it to a bowl game. Winning a conference game would mean the WSU football team would probably have made a 7-9 touchdown improvement over the previous season's result. 7 to 9 touchdowns!! That is really unlike anything any of us has ever seen. Don't be surprised if more than one pre-game analysis this season includes phrases such as, "Pray for Divine Intervention."

Don't worry, I'm not a total pessimist. I do believe that this will be turned around and it won't be long before the Cougs are once again making Martin Stadium a tough place to visit. I'm just lamenting the fact that it probably won't happen this season. I suppose the best we can do is remember the good 'ol days of 5-7 and the annual tradition of just barely missing a bowl game.