EDIT #2 (9/1) - Sooo.... after talking it over with WSU's media relation folks, I decided to take the video down for good. There's no set-in-stone rule on this sort of thing, but because the shots are wide-angle, they could potentially give opponents unnecessary insights to formations and such. Now, the reality is that I don't think anything from practice was particularly new or unusual with respect to Wulff's schemes, but we'd rather not take the chance of ticking off the coaching staff of the team we root for. So - no video. Don't worry; you're not missing anything Earth shattering.

EDIT (8/30): I'm taking down the video until we get official word/OK from WSU, because we really should have asked them in the first place -Grady

It's difficult to get excited about a team with low expectations. After all, WSU is expected to finish at the bottom of the Pac-10 conference. The Cougs are coming off a historically rough 2-11 season - one without much hope or a major talent influx to look forward to.

Still, all it takes sometimes is an exceptional performance by an individual to get a fan excited about their team again.

Can I get a do-over on my wide receiver preview? My hope for a Simone redshirt was completely misplaced. Gino is a phenomenal wide receiver, and he can help the team immensely. Right now. Despite the lack of height (he's 5'11"), Simone runs routes like a pro and has the hands to match. He caught the longest pass of the evening, which was the first play from scrimmage - 41 yards from the arm of QB Kevin Lopina. He ran a gorgeous crossing route for another catch, one of four total on the day. He caught the scrimmage's only passing touchdown, a 7 yard reception. He would have had the game's only 2-point conversion completion had a flag not snuffed it out.

Jeshua Anderson didn't play and still needs to rest up for the opener, but never fear. Pac-10 play will tell us if it's for real, but today, Gino Simone played like a number one receiver. I'm excited.

Now, let's break down the rest of the scrimmage by the winners and losers.

Wulff has been taking the stance all position races are even. Still, when it comes to quarterback, Lopina is the favorite, and he did little to prove otherwise Friday. Kevin looked at home in the offense, staying accurate (9 for 11) and comfortable throughout the scrimmage. He utilized the speed of his receivers, Simone included, and was able to move the ball despite a tough day for the running game. He was a little fortunate; Jared Karstetter made a spectacular adjustment to an underthrown ball for a long completion early on. Lopina also gave up 10 to 15 easy rushing yards on a rollout in favor of throwing to a fully-covered receiver. It almost cost him an interception. Still, Lopina was accurate enough to keep his place atop the currently invisible quarterback depth chart.

It's painful for me to say it, but our best shot at a first-team all Pac-10 selection this year may just be our punter. Once again, Forrest looked phenomenal, averaging around 50 yards per punt and downing two kicks inside the ten yard line. The first of those was a beautiful ball that touched down at the ten and bounced laterally to safety. The second, well, the second was just insane. 62 yards. Too bad our return man has a case of the dropsies.

Nico Grasu also looked like his usual clutch self, hitting 2 PATs and a 31-yard field goal.

Aside from Simone, the rest of the receiving corps also had a banner day. I mentioned Karstetter's 37-yard catch, and Kevin Norrell also looked comparable at times to a former Cougar #4 (Brandon Gibson). Randy Johnson (no, not that one) caught a couple balls as well. Some of it was the quarterback play; a lot of it was the receivers getting good separation off the line and hauling the ball in when it came their way.

Another potentially sketchy unit for 2009 showed glimmers of hope in the scrimmage. There was really no running game for the crimson or white teams (although we'll talk about the RB situation later), and pressure was applied to the quarterback fairly consistently. Travis Long and Kevin Kooyman each recorded a sack, and with the Lobbestael offense backed up against the goal line they almost earned a safety (the refs - yes, there were refs - got a little generous there). This was the kind of performance that gives us hope we won't be run over yet again in 2009.

Andy Mattingly looked like his old freshman self again, with a mammoth hit and good pursuit of the ball. The other linebackers did well aiding in run protection and swarming to the ball carrier. Pass defense was a little rough at times, but with the quarterbacks and receivers on it would've been difficult for them to stop it.

Came off the end untouched to block a Dan Wagner punt attempt. It was an exciting play, but extremely scary to witness our special teams melting down like that just before the regular season.

How can someone who played well have a bad day? When he didn't play well enough to clearly snatch the starter's job away from Kevin Lopina. Ocho Rojo was solid throughout and threw strikes to his wide receivers. However, he did sail the ball over a couple receivers' heads and struggled a little on his sideline routes. When it came to throwing it down the middle, however, Lobbestael was dead on.

If only we could put Lobbestael's arm on Lopina's body, with Alex Brink's brain. Then we'd have something special.

This is a little misleading. While there was virtually no run game for the Cougars in the scrimmage today, the Big Three (Tardy, Montgomery, MItz) were all sidelined. So don't read too much into it. Arthur Burns, Carl Winston and Leon Brooks ran for a total of 26 yards. Not great. Winston did score the other of the scrimmage's two touchdowns, following that Hicks blocked punt.

If the D-Line looked good, it only makes sense that they made the O-Line look overwhelmed. And so they did. Pass protection was decent, but the number of "sacks" (remember, no tackling of the QB) were a little too high for comfort. Also, the lack of rushing support in clear rushing situations around the goal line was a little disheartening. Still, with the key running backs out, the O-line provided enough protection for the quarterbacks to move the ball downfield. A couple rough QB-center exchanges are cause for concern - fortunately it's still just practice.

There really wasn't much to get excited about in the punt/kick return game, save for one decent punt return after Forrest had to kick it out of his own endzone. The kick returns should have/could have been better considering that most of the kickoffs were line drives - something that could cause us some trouble in the regular season. Still, I feel there was enough experimenting by the coaches going on in special teams that the right group of blockers may not have emerged yet.

No interceptions and a lot of accuracy from the quarterbacks do not bode well for the corners and safeties. They covered the deep ball fairly well, but were sometimes a little too tight with their men and risking pass interference. They had all sorts of trouble tracking Gino Simone and the other wideouts, and with the run game under wraps it would've been nice to see an interception or two. I did love Hicks' blocked punt, however.

I have to be careful here, as I don't like to be mean to 18-23 year old players doing the best they can (and a heck of a lot better than I could). So, allow me to say the one positive thing about Wagner's day: he didn't throw an interception. However, he did misfire on a wide open receiver down the field that would have easily been a touchdown. He also had that punt blocked, but that was hardly his fault.

Jeff Tuel didn't make an appearance; I am still very afraid of injuries forcing us to burn his redshirt.

Overall, a solid scrimmage and a good performance by the Cougs on both sides of the ball. I'll leave you with the only huddle from the scrimmage, at the end: 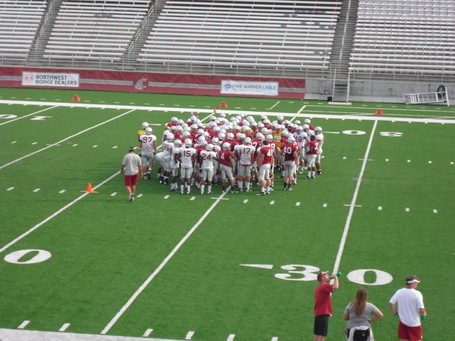