Is beer the answer?

Share All sharing options for: Is beer the answer? 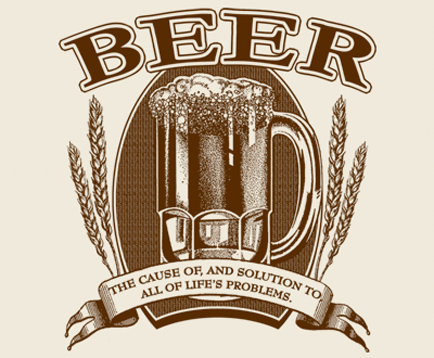 Is beer the answer?

Being the good Cougs that you are, your first gut reaction probably was to say "Of course! And make mine a Busch Light!" But the WSU administration has historically disagreed with that assessment, most recently displayed in V. Lane Rawlins' unprecedented assault on the Greek System and alcohol use on campus in general.

And, as you all know, alcohol is not sold in Martin Stadium. That's pretty common across the country and the norm in the Pac-10, where USC was the last school to ban alcohol sales at its games back in 2005.

But as schools struggle to meet budgetary challenges, at least one university's facility has determined that beer is indeed the answer:

Memphis may have lost its football opener to Mississippi, but the city won big thanks to huge beer sales. To offset operating losses at the city-funded Liberty Bowl, Memphis city officials introduced beer sales at Tigers home games for the first time, despite resistance from the school.

Beer sales totaled $114,576 after Sunday's opener, meeting 40% of the revenue goal the city had hoped to take in for the season to pay for recent stadium improvements. "We're tickled pink," said Memphis Mayor Pro Tem Myron Lowery. (Emphasis added by me.)

Now, I don't know about you, but staring down both projected budgetary deficits and a remodeling of our stadium that just isn't getting done thanks to dwindling contributions, isn't this something that the WSU administration should at least consider? The Pac-10 and the NCAA have no formal policy against it, and while the conference would clearly frown on it, the Cougs wouldn't be the first school in the league to do what it needs to do against the Pac-10's wishes.

The harsh truth is this: People who won't donate $100 a year to the athletic foundation will spend $8 a cup on beer. It sucks, and it's not right, but that's reality.

And while it's accurate that some people abuse alcohol at sporting events -- I have Seahawks season tickets, so I know better than anyone -- there also are loads of people who consume it responsibly. And it's not like there's not drinking going on at Martin Stadium anyway; between the Fieldhouse prefunk and the gallons of peppermint Schnapps being toted in by the alumni, there are plenty of red noses by the end of the game. Why not make a buck off it?

If you're concerned about the students, don't sell it on the student side. Security already does a bang up job keeping students out of the rest of the stadium (and keeping us out of the students); it would simply be business as usual on that front.

I know it's a long shot for myriad reasons, but in these times -- when our stadium is so badly in need coming up to Pac-10 standards and people are losing their jobs -- hasn't the time for piety passed?

Hat tip to Spencer Hall at the new SBNation.com for the heads up on this one. Seriously, if you haven't been over to the new site, do yourself a favor and get over there. It's not just a new site -- it's a new way of covering sports, and it's flat awesome.